Lahore: Imran Chishti, the man accused of organizing protest outside the Gurdwara Janam Asthan in Nankana Sahib and seen in video footage threatening Sikhs, was on Sunday (January 5) arrested by police in West Punjab.

In a posting on Twitter, Punjab Chief Minister’s focal person (digital media) Azhar Mashwani said that Imran Chishti had been detained under the Anti-Terrorism Act, which bars him from securing bail. “The main culprit in Nankana Sahib incident Imran has been arrested. FIR number 6/2020 u/s 295A/290/291/341/506/148/ 149, 6 sound system /7ATA has been registered at Nanakana Police Station,” said the Twitter posting. 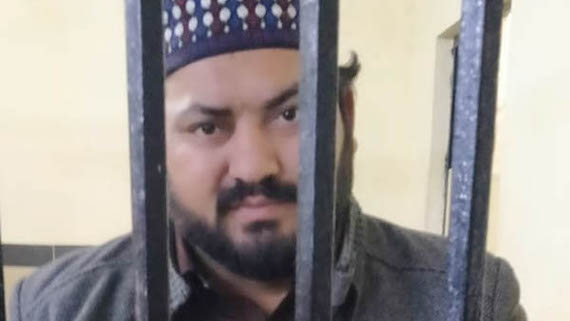 There had been growing calls for Imran Chishti’s arrest after his demonstration dispersed, with people in Pakistan and abroad taking to social media to calling Prime Minister Imran Khan to take action. Imran Chishti had even posted a video message, circulated on social media, ‘apologizing’ for the incident in a bid to defuse the ire directed at him.

Prior to Chishti’s arrest on Sunday, the prime minister had personally condemned the incident, taking pains to prove it was dissimilar to the ongoing oppression of minorities in neighboring India.

The major difference between the condemnable Nankana incident & the ongoing attacks across India on Muslims & other minorities is this: the former is against my vision & will find zero tolerance & protection from the govt incl police & judiciary;