Gurbachan Singh had hurled a shoe at Parkash Singh Badal at village Ratta Khera during an election rally on January 11, 2017.

Parkash Singh Badal had sustained minor injury near the eye in this incident. A report in Hindustan Times (dated: 12 Jan, 2018) noted that according to eyewitnesses Badal’s spectacles broke with the impact of the hit and there was minor bleeding. The chief minister was immediately escorted out of the venue 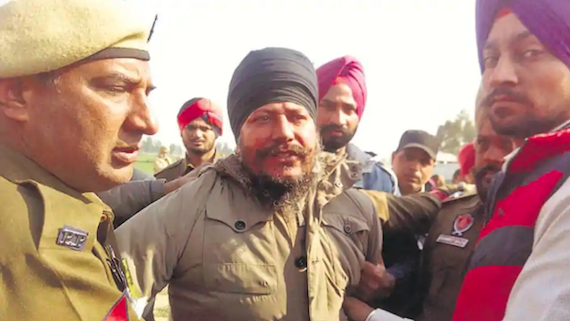 A case was registered against Gurbachan Singh at police station Kabarwala u/s 353, 355 and 186 of Indian Penal Code.

A report in a Punjabi vernacular notes that Gurbachan Singh is brother of acting jathedar Bhai Amrik Singh Ajnala.

Gurbachan Singh had hurled the show to show his anger against the then CM for his role in allegedly protecting the culprits of the beadbi incidents.