Mukatsar: A man reportedly took an extreme step and tossed his turban in front of Punjab CM Parkash Singh Badal during a Sangat Darshan at Mukatsar. The man, who was father of an unemployed lineman, wanted to seek assurance of employment to unemployed linemen but when CM Badal tired to skip away without extending any assurance the man tossed his turban in front of Badal.

CM Badal pleaded the man to not to do such an act citing the respect of turban but the man said that there was no respect for their turban as the police toss up turbans of their unemployed sons, who demand nothing else but employment. 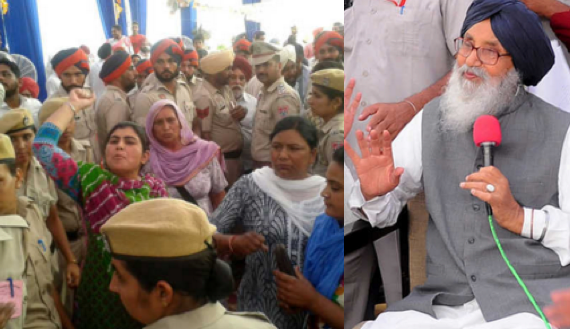 A few women also raised slogans in protest against CM Badal during the Sangat Darshan.

Police immediately came into action and overpowered them. They were taken to the police station.

The man was reportedly released after a short span while the women – Jasveer Kaur and Gurpreet Kaur from Faridkot, Amandeep Kaur and Santosh Rani from Kotkapura, and Fazilka’s Rani Devi; — were taken into preventive custody.

CM Badal ended up his Sangat Darshan in haste after the incident.

Soma Singh Bharo, president, Unemployed Linemen Union, said, “We have lodged a protest on almost every occasion, but the state government is not willing to give us jobs.”