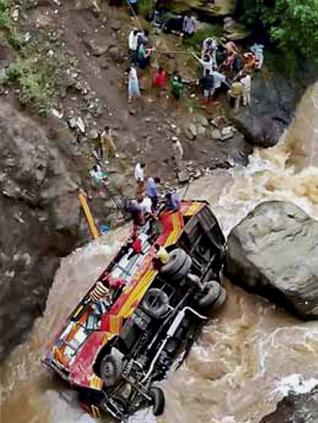 Ill-fated bus that fell into river

Kullu, Himachal Pradesh: A team of 12 Navy personnel has began search for 34 missing persons who were washed away in a river on July 23 after a Punjab bus fell into an river near Kullu. The bus was carrying Yatris from Punjab to the Gurdwara Manikaran Sahib and had 69 passengers on board, out of which 23 were injured. Only twelve bodies have so far been retrieved since the incident.

Kullu deputy commissioner Rakesh Kumar said that a 12 member team has reach to Kullu from Visakhapatnam. The team members are equipped with the modern gadgets, he added.

“Members of the team have surveyed the accident site downstream of the river to access the situation and they have a laid down a strategy for search operation”, he said.