“Nearly seven years have passed since the families of more than 1500 victims of alleged extra-judicial executions in Manipur moved the Supreme Court. Yet delays in prosecutions and ongoing threats and harassment continue to frustrate their quest for justice,” said Likhita Banerji, Researcher and Campaigner, Amnesty India. 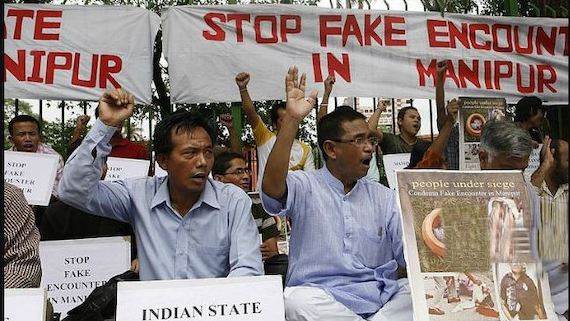 Following Supreme Court of India (SCI) orders in July 2017, the Central Bureau of Investigation filed charge-sheets in nine cases, and trials have begun in five cases in courts in Manipur. However, progress in three cases involving around 18 police officials has stalled after lawyers of the accused officials argued that government sanction was required for prosecution, and the courts agreed. There is no timeline for the government to respond to requests for sanction. In one case before the Chief Judicial Magistrate in Thoubal district, the government is yet to reply to a request made in July 2018.

“Requirements for government sanction for prosecution have been used for far too long to block accountability and shield perpetrators of human rights violations,” said Likhita Banerji. “Pending the repeal of sanction provisions, Manipur authorities must immediately grant sanction in all cases where such requests are made.”

Reprisals against victims and human rights defenders are also continuing. Sukham Punimabati Devi, a key witness in one case, was approached at her home on four occasions in December 2018 and January by a man who said he was acting on behalf of a police officer named in the charge-sheet in the case. She was told repeatedly that she had to meet the police officer, and was threatened with consequences if she refused. In an official complaint to the Director General of Police (DGP), Manipur, dated 13 January, Punimati Devi said, “I am concerned about my life and personal security. Therefore, I seek timely intervention of the respected DGP for securing my life and personal safety.” Despite her appeal, no action has been taken.

On 14 January, human rights defenders and families of victims were harassed and intimidated during a court hearing in Imphal, after an accused police official claimed that they were taking photos of him. The bags of the widow of the victim, RK Shanta, and a human rights defender, Renu Takhellambam, were forcibly searched. They say they were forced to open the ‘images gallery’ on their cell phones, and were harassed and humiliated. Around 50 police officials have been named in the charge-sheets so far, and all of them continue to serve in their positions.

Between 2017 and 2018, at least four people from EEVFAM reported facing reprisals. In July 2018, the Chief Minister of Manipur, in a meeting with Amnesty India, had given assurances that he would act on the matter. Despite this commitment, no concrete action has been taken.

“It is time that Manipur Chief Minister N Biren Singh walks the talk by ending delays and ordering prompt and independent investigations into reports of threats and harassment,” said Likhita Banerji.

Between 1979 and 2012, more than 1500 people were allegedly killed in extrajudicial executions by security personnel in Manipur. A collective of victims, Extrajudicial Executions Victim Families Association (EEVFAM) and Human Rights Alert, an NGO, filed a writ petition in the Supreme Court of India in 2012 to seek justice. In July 2017, the Supreme Court ordered the Central Bureau of Investigation (CBI) to investigate over 90 alleged extrajudicial executions in Manipur. These investigations are ongoing.