Imphal, Manipur: In the early hours of September 21, hundreds of police personnel and Central Reserve Police Force (CRPF) officers stormed a hostel in Manipur University in the state capital Imphal, conducted midnight raids and arrested 89 students along with six faculty members. The detained students included office-bearers, including the president of the Manipur University Students Union (MUSU) which is leading a campaign demanding an investigation into allegations of mismanagement and financial irregularities against Vice-Chancellor A P Pandey.

According to local reports, Jogeshchandra Haobam, Superintendent of Police, Imphal West, has confirmed that 89 students and six professors have been detained at different police stations. 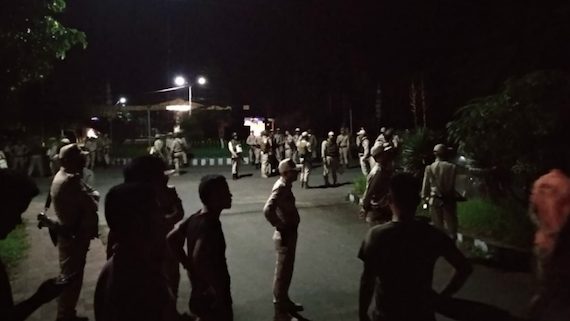 A news report in NewsClick.in has quoted undisclosed sources saying that “many students were injured during the midnight raid which saw the police accompanied by CRPF, using teargas and mock bombs inside the campus”.

Describing the incident as it unfolded, an eye witness, on strict condition of anonymity, reportedly told NewsClick: “Around 12 a.m, I heard loud noises from the lawn in front of the boys’ hostel and that is when we left our rooms to see what was going on. The CRPF and Police had locked the main gate of university and (they) started arguing with the students and the warden when around 400 policemen dressed in riot gear started throwing teargas shells and mock bombs in the rooms of the boys’ hostel. They even started beating students. This went on till around 3 a.m in the morning and then they arrested 86 students and six faculty members and left”.

The report notes that the defence authorities had a “list” of students and were conducting raids on the basis of that list.

Manipur University Student Union (MUSU) General Secretary, Laishram Kenedy, has issued an official notice addressed to MU’s teachers, students and the public of Manipur stating that the clauses put forth by Mr. Yugindro and his team are self contradictory. Kenedy has been in an undisclosed location following the arrests of fellow office bearers, students and faculty members of Manipur University.

Internet facilities remain suspended in the region and mobile services have been placed under surveillance while the varsity remains heavily guarded, notes NewsClick.In