Jammu (August 23): A delegation of Youth Akali Dal Amritsar, a wing of Shiromani Akali Dal Amritsar (Mann) led by S. Simranjeet Singh Mann, handed over a memorandum to the Additional Divisional Commissioner of Jammu seeking justice for the Sikhs massacred by Indian state in J&K province.

Addressed to the Chief Minister of J&K, the memorandum was written by President of Shiromani Akali Dal Amritsar S. Simranjit Singh Mann. 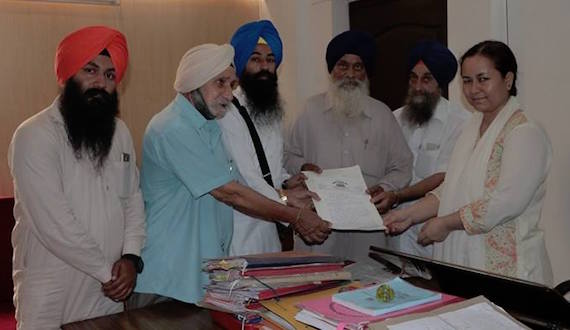 YADA leaders hand over memorandum to Divisional Commissioner of Jammu

In this memorandum former MP said that the J&K state did nothing to punish the Police cops responsible for the martyrdom of an innocent Sikh youth Bhai Jashjeet Singh Jammu.

He pointed out that instead of punishing the SSP responsible for unprovoked firing on protesting Sikh youth, the state has promoted him to the rank of DIG.

Notably, Bhai Jashjeet Singh Jammu attained martyrdom on June 4, 2015 in an unprovoked firing opened by the Jammu police on Sikh youths protesting against the tearing of posters that had image of Sant Jarnail Singh Bhindranwale. 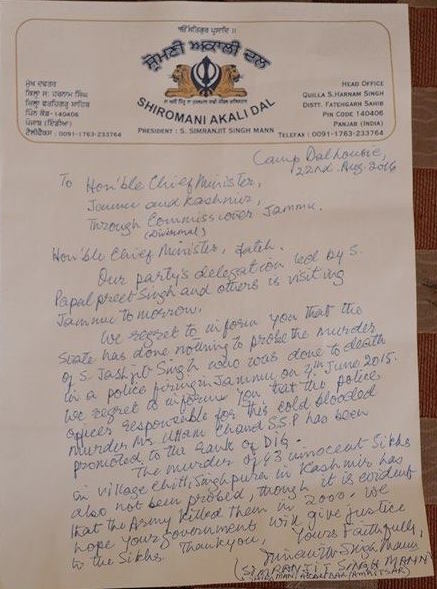 Talking about the massacre of 43 Sikhs in village Chittisinghpura of J&K territory, S. Simranjit Singh Mann has said that the massacre has not been probed yet even after passage of 16 years. He added that it was well established fact that the Indian Army itself had massacred Sikhs.