As per information these organisations have issued “an ultimatum” to the government till August 4 for releasing the persons who were detained during a raid at the house of Bapu Surat Singh on July 21.

Members of Bandi Singh Rihai Sangharsh Committee, including S. Gurdeep Singh Bathinda, Bhai Mohkam Singh, Advo. Harpal Singh Cheema, Jasvir Singh Kahndur and some others are also put under “preventive detention” by the police since July 20. Arrested persons also Sukhjit Singh Khosa, chief of the Sri Guru Ganth Sahib Satkar Committee, along with his 12 others were held during a police raid at Hassanpur village. 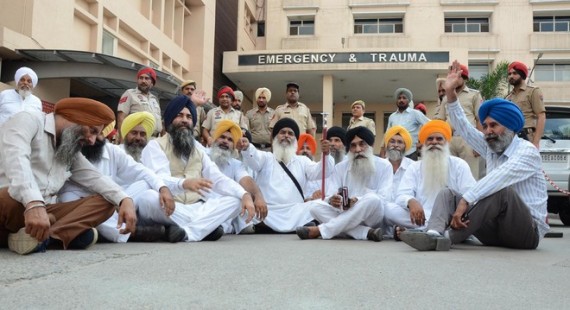 Dr Manjinder Singh Jandi, member of the Sangharsh Committee, said: “We have issued an ultimatum to the government till August 4. We want immediate release of the persons arrested on July 21”.

He said that Bapu Surat Singh should be discharged from hospital. “If the government refuses to meet our demands, we will decide on further course of action”, he said.

He said the details about the nature of action would be shared during the second meeting on July 30. Later during the day, members of various Sikh organisations visited the hospital. After being denied entry to the emergency ward, they staged a dharna against the state government.