Ludhiana:  As per the media reports a massive fire broke out in a plastic manufacturing firm in the Industrial area of Ludhiana city ‘s Mustak Ganj near Cheema Chowk on Monday. 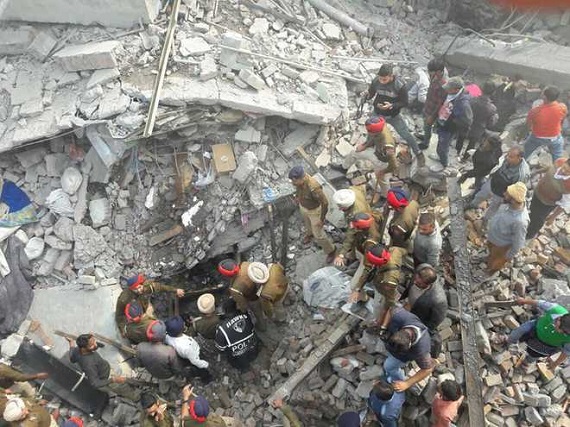 It is said that around 10-15 people thought to be working as labourers and 6 officials from fire department and an MC official are feared to be trapped inside as the four-storey building collapsed during the fire.

The fire officers trapped are Rajinder Sharma, Raj Kumar and Sumohan Gill and the MC official is Laxman Dravid, reads the media reports.

Meanwhile, three bodies were extracted and two injured persons were rushed to a hospital. The National Disaster Relief Force (NDRF) and the state disaster relief force are at the spot.

The deceased were Samaon Gill (sub-fire officer), Puran Singh, Rajan (both firemen), Laxman Dravid (Municipal Corporation official) and Inderpal Singh (owner of nearby Pal Taxi Services). The sixth deceased was yet to be identified.

The fire was reported at 8 am in Amarson Polymers and the building collapsed at around 12.15 pm. At least 15 fire tenders were rushed to the spot to douse the fire. It was further reported by the media sources that the factor consist of inflammable chemicals stored in plastic bags. Residents living nearby have vacated their houses, reports The Tribune (TT).