Bathinda: After the Special Investigation Team (SIT) formed by the Punjab police to probe Maur mandi blast case last month named two persons both, of them members of the Dera Sauda Sirsa (DSS), the state police has booked another DSS follower named Avtar Singh a resident of Massimajra village in Haryana, in this case.

Earlier, Gurtej Singh Kala, workshop in-charge of the dera, and Amrik Singh, a former security guard of the dera chief, were named as the accused. 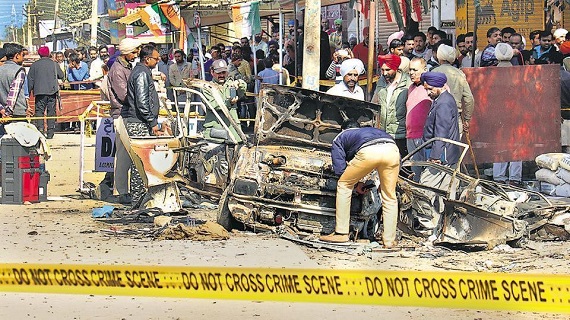 The blasts occurred during campaigning for assembly polls with Congress candidate Harminder Jassi, a relative of DSS chief Gurmeet Ram Rahim, having a narrow escape.(HT File)

It is reported by the media sources that all of these accused use to work in a car repair workshop at the Dera Sauda Sirsa (DSS) headquarters in Sirsa. These three are DSS members and were working in the portion of the workshop where its  head Gurmeet Ram Rahim’s cars used to get repaired and modified.

None of the accused has been arrested yet.

Furthermore, in his statement the SIT member reportedly said that Avatar Singh is an electrician by profession and he was the one who had helped in fixing batteries to the bomb device in the Maruti car used in the crime.

Apparently, the police failed to produce the two men it had previously named — Gurtej Kala of Dabwali in Sirsa district, Haryana, and Amrik Singh of Bhikhi in Mansa district — in court. They submitted that the three accused were absconding, notes Hindustan Time (HT).

The court has issued fresh arrest warrants for the three to be produced before it on March 22, the next date of hearing.

“Efforts were on to nab the three accused”, reads the quote from the statement given by DIG (counter intelligence) Ranbir Singh Khatra, “We will attach their properties after they are declared proclaimed offenders in case of their non-arrest by the next date of hearing (March 22),” he added to his statement.

During the course of Investigation four persons who are members of DSS and working in the motor workshop at Dera headquarter Sirsa turned themselves in to SIT formed to probe the bomb blast case as witnesses- that the role of DSS in this case surfaced.

They were allegedly the ones who had painted a red coloured Maruti 800 in white as per the orders of workshop superviser Gurtej Kala and one Amrik Singh. The repainted car was subsequently used in the bombing, notes Indian Express (IE) in its report.

It was on 31st January 2017, during the run-up to the state assembly elections that the blast took place after a poll rally of Congress leader Harminder Singh Jassi whose daughter is married to Dera head Gurmeet Ram Rahim’s son Jasmeet Singh.

Currently Dera chief is is in jail, having been convicted of rape and sexual harassment.