AAP woman wing President Raj Lali Gill and co-president Jiwanjot Kaur in a statement issued yesterday told Chief Minister Capt Amarinder Singh to take immediate action against the cabinet minister who is continuously harassing the woman officer by sending objectionable messages on her mobile number. While demanding to sack the minister, the AAP women leaders said that an immoral act by a minister cant be tolerated.

Notably, a senior IAS officer has alleged that a Punjab Minister had sent her “inappropriate” messages late in the night. 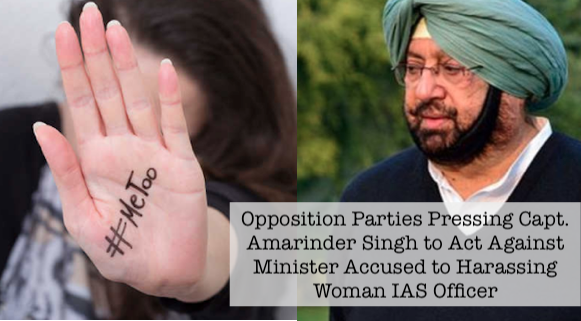 Raj Lalli Gill blamed Capt Amarinder Singh and AICC president Rahul Gandhi for adopting double standards on the issue of moral values. On one and the Congress leaders were demanding resignation of M.J.Akbar who was accused of sexual harassment by female journalists, on the other hand the Chief Minister and AICC president were trying to save the cabinet minister of Punjab whose conduct amounts to sexual harassment.

Jiwanjot Kaur said that morality demanded that cabinet minister be sacked immediately and a special committee of senior woman officers is set up to record the statement of victim and give her justice. They said that immediate action against the minister would have strengthened the #metoo campaign in India.

The AAP women wing leaders added that Capt Amarinder Singh and Rahul Gandhi still has a chance to rectify their mistake and sack the minister to set an example.

Look at your arrogance @capt_amarinder. You ‘asked’
the Minister to ‘sort’ out issue of outraging the modesty of woman IAS officer with the lady in question. Shouldn’t you have sacked him first? Protecting minister is more imp than woman’s safety to you. #MeTooPunjab. #TimesUp