Lambi/Muktsar (Dec. 11): A 12-year-old Dalit girl was crushed under a private bus on the Lambi-Gidderbaha road at Channu village in Lambi Assembly segment this evening. The police had not registered any case till the filing of this report.

Agitated over the death of Arshdeep Kaur, a class VIII student, angry residents of the village first vandalised the bus (PB 30 C 2278) and then blocked the road by placing the body there. They demanded the arrest of the accused, who managed to flee from the spot.

Later, they damaged the windowpanes of another bus (PB 30 L 4378) of the same transport company.
The villagers said the victim was standing on the roadside, when the bus crushed her around 5.30 pm. She was killed on the spot. The parents of the deceased girl are small-time workers. 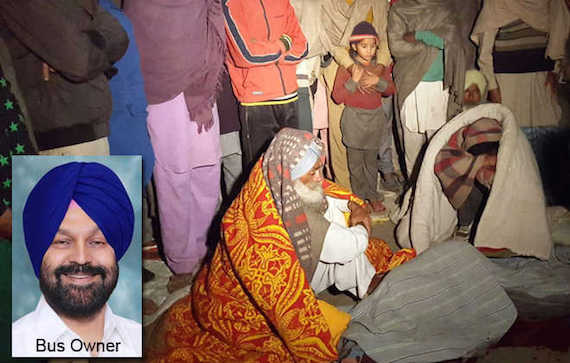 The situation was tense till the filing of this report. A large number of policemen were also present on the spot.

Meanwhile, the SAD leadership had started efforts to pacify the protesters.
When asked about the registration of a case, Gurpreet Singh, SHO, Lambi police station, said, “As of now, the case has not been registered.”

In May this year, two girls had alleged that the conductor of a bus belonging to the same company had molested them.

Later, the police found that their accusations were “false” and had recommended to cancel the case registered against the bus conductor.