London: In a speech at the United Nations in New York last Friday, Indian Prime Minister Narendra Modi was in a sombre mood. He was showing his frustrations by his failure to secure suitable support from the USA, China and Russia to change the composition of the UN Security Council.

China is openly opposed to India becoming a permanent member, but the USA has now also backtracked and Russia has taken the position that the powers of the present members should remain the same with respect to full veto powers. The USA is now backing the proposal of nations under the banner Uniting for Consensus Group, led by Canada, Italy, Colombia and Pakistan that is opposed to the adding the G-4 (India, Germany, Japan and Brazil) to the UN Security Council. 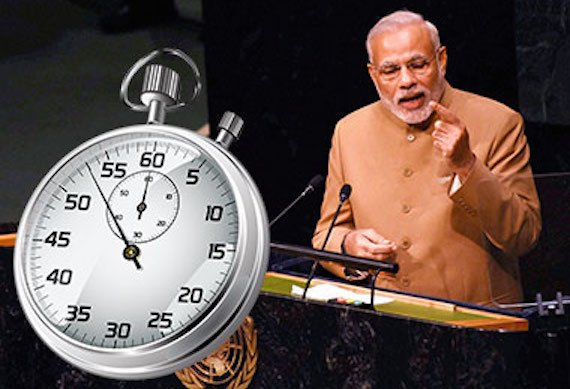 Modi’s speeches are normally fiery, filled with metaphors, anecdotes and quirky one-liners, but on Friday he simply read out his speech in a monotonous tone. During his speech delivered in Hindi there was pin-drop silence. In contrast the previous speaker, the German chancellor – Angela Merkel – was applauded almost every three minutes.

In his speech he also had the cheek to praise from the outset Pandit Deen Dayal Upadhyaya a leading historic figure in the Rashtriya Swayarmsevsk Sangh (RSS). The RSS is a Hindu nationalist paramilitary group that has been criticised as a violent extremist organisation.

The heads of some of the most powerful and influential countries listening to Modi would not have appreciated the background of those Modi was expressing an admiration for. L K Advani devoted a chapter in his book My Country, My Life to his “political guru”, Deen Dayal Upadhyaya.

Modi at the end also became a laughing stock as he exceeded the time of ten minutes by a staggering 13 minutes. The Ugandan President Yoweri Museveni ridiculed Modi representing 1.2 billion by stating he had exceeded the time limit – at least one minute for every 100 million people.