The following is a personal report by Pieter Friedrich, an advisor to Organization for Minorities of India, about his experiences being assaulted while peacefully protesting Modi’s “rock-star” reception in San Jose, CA.

While peacefully protesting Indian Prime Minister Narendra Modi on Sunday, September 27 in San Jose, CA based on his orchestration of genocide of minorities, criminalization of religious liberty, and other human rights violations, I was assaulted twice by his followers.

I was not injured. But I was repeatedly pushed and shoved and touched against my will and as I repeatedly and loudly stated: “Do not touch me. You are assaulting me. Stop touching me.”

The first time I was assaulted, my signs were stolen.

Modi spoke in the SAP Center across the street from a public park. A giant screen was set up on the park green to project his speech and the hours of entertainment beforehand. About 6pm, while it was still light, I walked into the park as probably a couple hundred Modi followers sat watching the screen.

Standing behind them while they sat watching the screen, I silently and peacefully stood there holding two signs — one said “Modi committed genocide” and the other “#ModiFail.”

A man ran up behind me and grabbed the signs out of my hands. I turned around, saw him crumple them up, approached him, pointed and shouted: “Thief, thief, thief. This man assaulted me. This man stole my signs.” He then threw them on the ground and I picked them up, threw them in a trash can, walked out of the park and told an officer as I passed: “I was just assaulted.”

I went to get more signs (corrugated plastic this time) and returned, but the police had formed a ring around the park and were denying people access. I engaged with the police repeatedly, pled with them to Google Modi, told them Modi committed genocide against minorities and told them that his police officers massacred thousands of Muslims and Christians.

Someone told me that police were under orders not to speak to protesters. I spoke to one officer, asking loudly so that others could hear: “Is that true? Were you ordered not to speak to us? Did you take a vow of silence?” The man remained mute. I said: “That’s sad. Don’t you have free speech? If I had to give up my free speech in exchange for a paycheck, I would find another job.”

I then spoke to several other police officers and protesters, stating:

“So you can support genocide in America, you just can’t protest it? Is this free speech? Regulated speech is not free speech. This is a public park. Don’t we have a right to be here? We want peace. We are here because we are protesting violence. The Modi supporters are initiating violence. A foreign politician who committed genocide gets celebrated by the city but American citizens protesting it are banned from a public park.”

Several officers seemed moved to think differently as I told one he had kind eyes, told a sergeant, “God bless you,” and watched as several listened to Indian minorities reason with them by explaining Modi’s atrocious human rights record.

In the photo attached, you will see Modi on the big screen. The police line gave way and allowed us in – strangely – right before he took stage inside center across the street. Police several times told me and other protesters that they were there to reduce tension and prevent incidents. But nobody bought that argument.

A police lieutenant finally came down the line and, not far from me, told a sergeant they were going to allow us to “make our point.”

It was very odd timing when the police line finally gave way because it was dark by then, there were hundreds more Modi followers, and they welcomed him with religious fervor as he came on screen — rising from a seated position on the grass and raising their hands and screaming his name.

But I walked in, with others. I walked down the sidewalk to stand directly in front of the screen so the crowd could see my new signs — one said “Atrocity Nation: #End Caste Apartheid Now” and one said “Crimes of Modi: Forcible Conversions of Christians, Muslims, and Sikhs | 2002 Massacre of Muslims” on one side and “Modi Believes in Violence Not Development” on the other side.

That was when I was assaulted for the second time.

I was in front of the screen in the park when Modi started speaking. A very large, probably 300lb man muscled up on me. He began touching me and shoving me. I told him: “Do not touch me!” He responded: “What are you going to do about it?” I said: “I want peace.” He shoved me again; again I told him not to touch me. “You are assaulting me,” I said.

“I will break you,” he threatened me. Then someone grabbed one of my two signs (the “Crimes of Modi” sign) and I walked around behind the projector, came back to the other side, gathered with protesters, and when I saw my sign was dropped on the ground in front of the projector I dodged in to retrieve it.

It is worth noting that I was standing at the very front of the crowd, in full view of the police, while this man assaulted me. Female protesters reported to me that the same man approached them earlier in the evening and similarly threatened and attempted to intimidate them as well.

Then I stood and watched the crowd, many of whom tried to stare me down. I spoke to several, especially after the silence when they would applaud Modi. “Please do not applaud a mass murderer,” I said. The protester chanted “No Justice, No Peace” on a portable loudspeaker just feet from the hundreds of Modi followers who sat bedazzled by the screen. “Shame on Modi,” we also chanted. 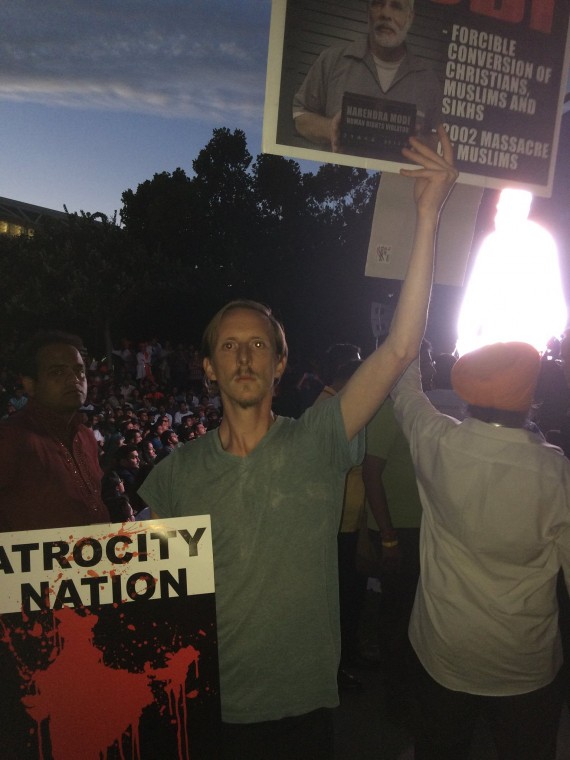 Minutes after being assaulted, Friedrich stands with Modi on screen behind him

“Modi is not God, Modi is below God,” I implored the crowd. Many people in the arena seemed uncertain, which is good because I am certain that was I was saying was true. A lot of the followers seated nearby did not applaud when others did and they kept glancing at the line of protesters.

The police lieutenant moved down the line in-between the protesters and the Modi followers. He came up to me, put his hands on me, and told me to move. I asked: “Where do you want me to go.” He said: “Move back two feet, you can’t block their view.” I said: “Yes, sir.” He pushed me back and I stepped back without resisting.

There were thousands of protesters present from a wide, wide, wide range of communities — myself, a Christian, as well as Sikhs, Muslims, Tamils, Gujaratis, Maharashtrans, Kashmiris, Dalits, and God only knows who else. The protest was active for hours (from about 4pm – 8pm) and still going when I left. Protesters were assertive, but I witnessed no aggression on their part. All the violence I saw was initiated by Modi followers and I heard multiple reports of female protesters being grabbed, threatened, and intimidated.

There is no greater proof that Modi’s tactics — indeed, the tactics of the Indian State’s system as a whole — are built on brutality, violence, and murder than for rabid followers of this foreign politician to assault a U.S. citizen while he peacefully protests in his home-state.

* Views expressed by author are his own.

* About author: Pieter Friedrich is a US-based writer, editor, and activist with a focus on world religions and history, political and religious liberty, and human rights. He is on the board of several groups, including Organization for Minorities of India.