“Anti-Muslim sentiment permeates the policies of both U.S. and Indian leaders. For decades, the U.S.-India relationship was anchored by claims of shared values of human rights and human dignity. Now, those shared values are discrimination, bigotry, and hostility towards refugees and asylum seekers,” said Margaret Huang, Amnesty International USA’s executive director.

“The internet and political lockdown in Kashmir has lasted for months and the enactment of CAA and the crackdown on protests  has shown a leadership that is lacking empathy and a willingness to engage. We call on President Trump and Prime Minister Modi to work with the international community and address our concerns in their bilateral conversations,” said Avinash Kumar, Executive Director, Amnesty International India.

The enactment of the Citizenship (Amendment) Act (CAA) 2019 extends Indian citizenship only to Hindus, Sikhs, Parsis, Christians, Buddhists and Jains from Afghanistan, Bangladesh and Pakistan, and India, legitimizing discrimination based on religious grounds. Besides signalling a divisive shift in the determination of Indian citizenship, the amendments also weaponize the National Register of Citizens and National Population Register against minorities – particularly Muslims — pushing them towards the limbo of detention and statelessness. The U.S. Commission on International Religious Freedom (USCIRF) and various U.S. senators have also raised serious concerns about this law. 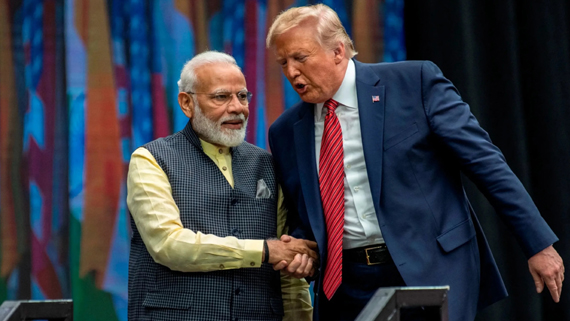 With the passage of CAA, hundreds and thousands of people including students took to the streets to protest against the bigoted law. The police response to such protests has been heavy-handed and resulted in the deaths of over 30 people, including an eight-year-old child, and thousands of arrests under colonial and repressive laws. With rampant and unchecked internet shutdowns during the protests, India has also become the country with the highest number of shutdowns. Furthermore, statements such as “identify them (the protestors) by their clothes” or “shoot the traitors” by Prime Minister Modi and his party workers peddled the narrative of fear and division that has fuelled further violence.

More than six months after the abrogation of Article 370 of Indian Constitution that guaranteed autonomy to Jammu & Kashmir, internet services remain only partially available in the former state and political leaders remain detained under the repressive Jammu & Kashmir Public Safety Act.

The Muslim ban expansion by President Trump affecting Nigeria, Eritrea, Myanmar, Kyrgyzstan, Sudan and Tanzania will go into effect on February 21.  Amnesty International USA’s researchers travelled to Lebanon and Jordan to conduct nearly 50 interviews with refugees that as a result of the previous version of the ban, have been stranded in countries where they face restrictive policies, increasingly hostile environments, and lack the same rights as permanent residents or citizens. Amnesty International USA has stood against the Muslim ban from its first iteration, calling on Congress to nullify it through passage of the NO BAN Act (H.R. 2214 / S. 1123), which has strong support in both bodies of Congress.