New York, NY, USA: Following the withdrawal from Sri Guru Granth Sahib World University (SGGSWU) vice-chancellor, more Sikh scholars have withdrawn their names from the University of California, Riverside’s upcoming conference on “Living and Making Sikhi in the Diaspora: The Millennial Generation Comes of Age”. The conference scheduled to be held from May 8 to 10, 2015 was being organised by Dr. Pashaura Singh, who is accused of making biased and ill-motivated research challenging the authenticity of Guru Granth Shaib.

Whereas Dr. Gurmohan Singh Walia, vice-chancellor withdraw from the conference after expressing some reservations, others who have withdrawn from the conference Baljeet Singh Sahi, Dr. Jasbir Singh Mann, Dr. Gurmel Singh Sidhu and Jatinder Singh Hundal. 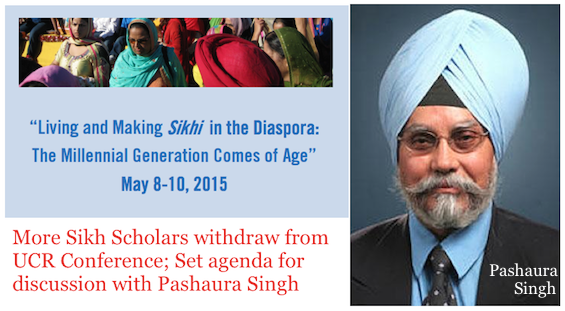 Sikh community has taken serious notice of your 2013 and 2014 articles from recently published books.

It appears you have again done academic misrepresentations in spite of your written assurance to Sikh institutional authorities. Community members approached Dr. Gurmohan Singh Walia Vice chancellor for their concerns. He reviewed the submitted academic evidence and wrote you (about his withdrawal from the conference). […]

You are well aware of solidarity of the Sikhs behind their great faith, the latest among the revealed religions. Sikh community is alert, as ever before, and will no longer tolerate such misrepresentations and misinterpretations of the Sikh scripture/philosophy or history of Sikhism, as have been going on for the last over one century and intensified during the last couple of decades in north America.

Sikhs always take their advice from Sri Guru Granth sahib ji. On such issue Ramkali M1 page 938 verse reads
[…]
Don’t be angry with us – please tell us: How can we find the Guru’s Door?”

Community has advised me to write you to have academic discussion on the issues. Therefore request is made that you arrange a conference within 9 months at UC riverside on following issues in order to have free and honest academic discussion to settle the debate. Community will provide all funding for such conference. If you do not do so then, we will request VC Dr Gurmohan Singh Walia to do so and invite you at SGGS university Fategarh,Punjab India or we will do Public conferences in California and will request you to present your perspective on the issues. Suggested Topics for clarification:-

2. Evaluation of Draft Theory and validity of ALL Undated Manuscripts; MS# 1245,vanjara pothi, Bahowal pothi, Roopa pothi and Sur Singh wala pothi and their role if any in Sikh cannon formation.

Therefore, in light of above developments Myself, Dr. Gurmel Singh Sidhu and Jatinder Singh Hundal regret to inform you that we will not be able to present our papers on Sunday 10th May 2015 . […] Scholars interested on Sikh Pioneers academic issues can read our opinion in our recently published Books […].

In his letter announcing withdrawal from the conference, Baljeet Singh Sahi wrote:

In a few days scholars from around the world will enjoy an academic conference; Living and Making Sikhi in the Diaspora: The Millennial Generation Comes of Age, which attempts to define Sikh community in the current context of ‘Globalization’.

After going through the papers being presented at the conference, the word that keeps coming back to me is ‘Millennial’. It is a word derived from ‘Millennium’ that has origins rooted in Christianity: a thousand years; the name given to the era mentioned in Rev. 20:17. In modern times, ‘Millennium’s’ origin has been dated back to 1630-40. For the purposes of understanding generations the ‘Millennial Generation’ terminology is credited to Neil Howe and William Strauss, the authors of the 1991 book Generation: The History of America’s Future, 1584 to 2069, which is now being extensively used to define and study the ‘Generation Y’, those born in the 1980s and 1990s and thus coming of age in year 2000.

Considering the factors surrounding the word ‘Millennial Generation and Millennium’ and its specificity to address those in America and Christians, its prudent to question whether it should be a part of ‘Sikh Study’ structure in understanding a diaspora community belonging to a religion, which is only 546 years old. While many will argue that its a baseless point, it’s relevance becomes important because ‘Generation Y’ is explored mainly from the perspective of advancements in technology, globalization, behavior with respect to tolerance, marketing and workplace. Its a generation often compared with their parents as more confident, who are raised as “follow your dream”, greatly enlightened but largely narcissistic. Conclusively, the ‘Millennial Generation’ has been coined to justify the changing dynamics of the society, which tends to agree that change, is part evolutionary.

In Sikhi however, evolutionary change is addressed only as betterment of ‘the being’ and not subjective adjustment to changes brought about by ‘Man’ just because they suit us and those, which are deemed fitting to others.

Since my paper does not conform to the subject matter of the ‘Millennial Generation’, it is pointless, as a community member, to address an academic fraternity involved in research study quite different from that of mine. Therefore, I am withdrawing from the conference.

Sikh Siyasat News (SSN) has learnt that academicians related to Sikh American Legal Defence and Eduction Fund (SALDEF), the Jakara Movement and the Sikh Coalition have not announced any withdrawal from the conference.

Sikh Youth of America had raised alarm against conference by Pashaura Singh:

A US based Sikh diaspora group, the Sikh Youth of America (SYA) had raised alarm against the UCR conference by Pashaura Singh. In a written statement, SYA had called upon Sikh scholars and the Sikh masses to boycott the conference. SYA had clarified that the boycott call was given in wake of specific background and controversies surrounding Pashaura Singh (read full statement here).