Movies hook millions of young people on tobacco: WHO

GENEVA: World Health Organization (WHO) recently called upon governments to rate movies that portray tobacco use in a bid to prevent children and adolescents from starting to smoke cigarettes and use other forms of tobacco.

Movies showing use of tobacco products have enticed millions of young people worldwide to start smoking, according to the new WHO “Smoke-free movies: from evidence to action”, the third edition since its launch in 2009. 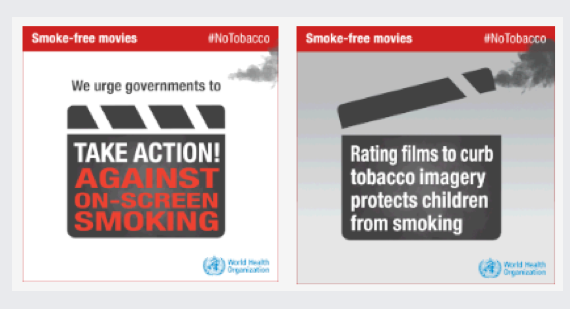 “With ever tighter restrictions on tobacco advertising, film remains one of the last channels exposing millions of adolescents to smoking imagery without restrictions,” says Dr Douglas Bettcher, WHO’s Director for the Department of Prevention of Noncommunicable Diseases.

Taking concrete steps, including rating films with tobacco scenes and displaying tobacco warnings before films with tobacco, can stop children around the world from being introduced to tobacco products and subsequent tobacco-related addiction, disability and death.

“Smoking in films can be a strong form of promotion for tobacco products,” adds Dr Bettcher. “The 180 Parties to the WHO Framework Convention on Tobacco Control (WHO FCTC) are obliged by international law to ban tobacco advertising, promotion and sponsorship.”

Studies in the United States of America have shown that on-screen smoking accounts for 37% of all new adolescent smokers. In 2014, the US Centers for Disease Control and Prevention estimated that in the United States alone, exposure to on-screen smoking would recruit more than 6 million new, young smokers from among American children in 2014, of which 2 million would ultimately die from tobacco-induced diseases.

In 2014, smoking was found in 44% of all Hollywood films, and 36% of films rated for young people. Almost two thirds (59%) of top-grossing films featured tobacco imagery between 2002 and 2014. That same year, the US Surgeon General reported that adult ratings of future films with smoking would reduce smoking rates among young people in the USA by nearly one-fifth and avert 1 million tobacco-related deaths among today’s children and adolescents.

Many films produced outside of the United States also contain smoking scenes. Surveys have shown that tobacco imagery was found in top-grossing films produced in six European countries (Germany, Iceland, Italy, Poland, the Netherlands and the United Kingdom), and two Latin American countries (Argentina and Mexico). Nine in 10 movies from Iceland and Argentina contain smoking, including films rated for young people, the report states.

The WHO Smoke-Free Movie report, in line with the guidelines of article 13 of the WHO FCTC, recommends policy measures including:

Dr Armando Peruga, programme manager of WHO’s Tobacco-Free Initiative, says countries around the world have taken steps to limit tobacco imagery in films. “China has ordered that ‘excessive’ smoking scenes should not be shown in films. India has implemented new rules on tobacco imagery and brand display in domestic and imported films and TV programmes. But more can and must be done,” Dr Peruga adds.