MP John F. Spellar wrote: “Dear David, I am writing further to the meeting between yourself and Members of Parliament regarding the case of Mr Paramjeet Singh of 41 Bowden Road, Smethwick, West Midland”.

“You are obviously aware of the details of the case, but the latest development in the extradition proceedings from Portugal is that the court hearing yesterday submitted the requests and evidence in support of extradition on behalf of India to the Portuguese Attorney General. This would now be submitted to the Minister for Justice to consider the request in the manner outlined in your letter to be dated the 1391 January” he continues.

“In that letter you said that the Ministry of Justice would decide if there are political grounds to prevent the extradition”, MP John Spellar notes, while adding: “[a]s we indicated at the meeting this does seem to be the stage at which the UK should intervene and make a very strong case that Paramjeet Singh, having been granted the protection of the United Kingdom, in him being granted refugee status, that he should be returned to the United Kingdom and any complaints that the Indian Government have with regard to his actions should be taken up with the UK”.

He further write that: “I understand that the case should be returned to court within the next 2-3 weeks and would therefore request urgent action, both from the Foreign & Commonwealth Office, to their opposite numbers in Portugal and also for our Ambassador in Portugal to make representations. In the light of the circumstances I welcome an early response”. 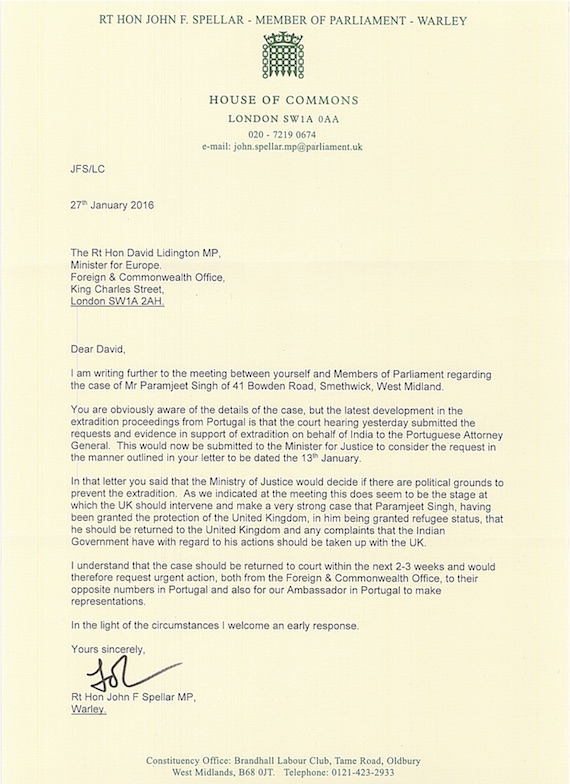