Stockton, CA: The conversion of Indian minorities to Hinduism drew worldwide attention late last year when reports surfaced that converts only participated in the mass ceremonies known as “Ghar Wapsi” after they were threatened with loss of government benefits if they refused.

Noting that the conversions are sponsored by “social organizations backed by India’s ruling political forces,” sponsors of a June 20 conference [click here to RSVP on Facebook] at University of the Pacific in Stockton, CA say they are concerned the Indian State is using “coercion and legislation” to promote the country’s majoritarian religion. The Ghar Wapsi ceremonies are backed by Indian politicians like MP Yogi Adityanath, who in February demanded a national law banning conversion to non-Hindu religions without government permission. After a December 2014 Ghar Wapsi conversion of several hundred Muslims (who later reported they were threatened with violence and told they had to convert to receive government ration cards), MP Adityanath said the new converts will “be placed in the same caste and gotra [clan] to which their Hindu ancestors belonged.”

“Casteism in India today is most obvious in state-sponsored genocides against Indian minorities like the Sikhs, Christians, and Muslims,” says Jada Bernard, who will speak at the Stockton conference. An advisor to Organization for Minorities of India (OFMI), a group co-sponsoring the event, Bernard continues: “Believers in Brahmanism are offering up these people groups, just as during the Third Reich the Jews were offered up as a burnt offering, in favor of progression to a new system. And this new system is the Indian State being in totalitarian control of the people down to their religious choices and even their ethnicity.”

B. D. Borkar, the National General Secretary of India-based Mulnivasi Sangh, will keynote the conference. A group established to fight the caste system, Mulnivasi Sangh says it is the “Voice of Liberation of Indigenous People and their Motherland from Aryan Invaders.” Brahmanism is linked to the Aryan supremacy theory popularized by Nazi dictator Adolf Hitler, notes Pieter Friedrich, the Executive Director of U.S.-based Sikh Information Centre. Friedrich, who will speak on June 20, remarks: “The supposed superiority of the Aryan race is advanced by both Brahmanism and Nazism as a racial theory used to justify subjugating others and treating non-Aryans as sub-human.” 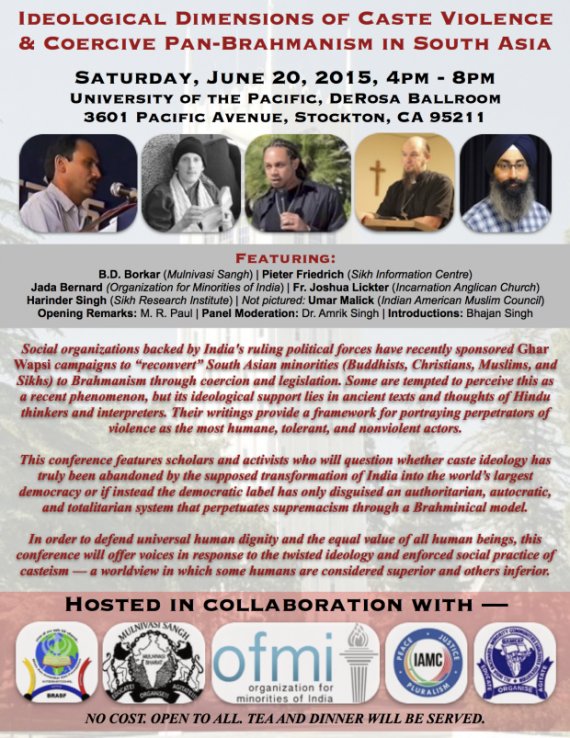 Speakers Borkar, Friedrich, and Bernard will be joined by Fr. Joshua Lickter (Incarnation Anglican Church), Harinder Singh (Sikh Research Institute), and Umar Malick (Indian American Muslim Council). Organizers state: “In order to defend universal human dignity and the equal value of all human beings, this conference will offer voices in response to the twisted ideology and enforce social practice of casteism — a worldview in which some humans are considered superior and others inferior.” Sponsors include the Bhim Rao Ambedkar Sikh Foundation, Mulnivasi Sangh, Organization for Minorities of India, Indian American Muslim Council, and the All India Backward (SC, ST, OBC) And Minority Communities Employees’ Federation.

“Speakers will question whether caste ideology has truly been abandoned in India,” says Bhajan Singh, Founding Director of OFMI. “Indians have historically voluntarily converted away from Hinduism to minority religions to escape casteism, but now agents of the Indian State are forcing them back into the supremacist system. Brahmanism, the oldest form of Hinduism, is behind a lot of new laws in India today that ban religious freedom, criminalize non-Brahman lifestyles, or even require students in State schools to participate in Brahmanical religious practices and scripture-readings.”

“Caste denotes a system of rigid social stratification into ranked groups defined by descent and occupation,” explained Human Rights Watch, noting that “divisions that are reinforced through the threat of social ostracism, economic boycotts, and even physical violence.” In 2001, the internationally-recognized group claimed the Indian State was attempting to censor all discussion of caste issues, stating: “India has used political and economic influence over other countries to pressure them into a partnership of silence; they have sent numerous people to non-governmental meetings who had clearly received a brief to argue the government’s side, and have used influence within UN human rights bodies to sabotage any reference to caste.”