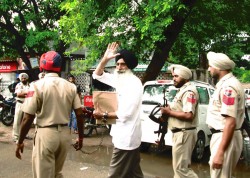 Chandigarh/ Punjab (August 05, 2014): According to information published by Sikh Organization of Prisoners’ Welfare (SOPW) on it’s website on August 01, 2015, a Chandigarh court of Magistrate Jasvinder Singh sentenced Narain Singh Chaura to 2 years in prison, in a case which realted to alleged possession of illegal arms by Narain Singh Chaura in Sector 51 Chandigarh.

This sentence of 2 years has been declared ‘undergone’ as Narain Singh has served more than 2 years in prison already.

It is worth noting that Narain Singh remains in Amritsar Jail as he is still facing some other cases against him.