Amritsar, Punjab: Taking a dig at prime minister Narendra Modi for calling Punjab CM Badal India’s Mandela, the Dal Khalsa said Nelson Mandela fought for freedom of his people, while Badal is instrumented in supressing and crushing the voice of those who were fighting for freedom of their peoples.

Party head H. S. Dhami said Mandela is credited with delivering independence to bornslaves where as contrary to it Badal was discredited with strengthing slavery on sikhs.

Modis uncalled praise for Badal realfirms our believes that Badal has always been beat but for New Delhi to suppress Sikhs and their aspirations for freedom, said head of Sikh hardliner group. 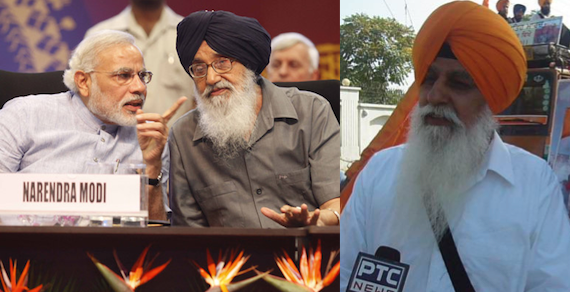 “Nelson Mandela’s statemanship , vision, dedication and sufferings for his own people was extraordinary, on the other hand the entire fight of Badal was to acquire wealth, power, pelf and privilege for self and his family members.” Modi’s utternesses was insult not only to antiapartined hero but also hundreds of thousands of people of South Africa who relish on the leadership of Mandela on the contrary the people of Punjab were reeling under the tyrannat and torture rule of Badals. Mandela fought for rule of law, human rights and justice while Badal was in famous in crushing human rights, dissent and freedom of expression and establishing , “law of rulers”.

Dhami condemned Badals for detaining their party activists including Kanwarpal Singh on flimsy grounds, ” Badals are misusing the police for setting scores with those who challenges Badals in unprincipled domination in relegiopolitical spheres. Dhami revealed that the police was still searching for youth attached with their party’s youth wing, who pasted posters in the city urging the Sikhs to bycott Sikh high priests (Jathedar) for their faulty decision in pardoning heretical cult head Gurmeet Ram Rahim.