Chandigarh: Aam Aadmi Party (AAP) Sangrur Member of Parliament (MP) Bhagwant Mann said in a statement that, as expected, Prime Minister Narindra Modi’s Punjab proved to be a virtual “damp squib” as it brought no cheer to the people of Punjab, especially the distressed farming community and the youth. He accused Modi, who, in league with the Badals, was playing politics over the 1984 riots and the ground-breaking Kartarpur corridor ceremony, only to distract peoples’ attention from the core issues the state was confronted with. 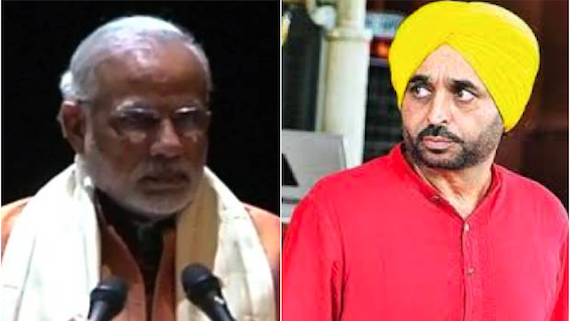 Bhagwant Mann said that, as expected, Narendra Modi’s Punjab visit turned out to be mere ‘jhumla’ as it failed to bring any cheer on the faces of the distressed farmers in terms of announcing loan waivers, leaving them with choice but to committee suicides. Similarly, on the issue of employment generation in the state, he preferred to keep mum, leaving the farmers and the youth disappointed. The much-hyped visit ended up in just an allegation- and counter-allegation session, digressing from the core issue faced by the state, Mann said.

AAP MP said that Modi was playing politics on the nerve-chilling 1984 Sikh carnage, saying that the Congress party was protecting the ‘killers’ behind the massacre. Mann said PM, who accused the Congress Party of install tainted leader Kamal Nath, and an accused in the case, as chief minister of Madhya Pradesh. Mann dared Modi, saying what was holding Modi dispensation to take action against the tainted leader. He accused him of double-speak on the issue.

Bhawant Mann reiterated that Modi, during his long speech, instead of announcing any farm loan waiver, made a u-turn accusing the Captain Amarinder Singh for the sorry state of affairs in this regard. He reiterated that even though the party after assuming power had promised to bail out the distressed farmers in the state, nothing concrete had come out of the narrative. AAP MP further said the problem of unemployment did not figure in his address to the people of the state, leaving both farmers and the youth dismayed.

He further said that the long-pending demand for the grant of special package to the people of border areas of the state at par with some of the hilly states of the countries were getting during the Atal Bihari Vajpai government. He said the much-awaited demand had remained on the back-burner during the tenure of the Modi-led dispensation.

Sangrur MP said that another long-standing issue for the grant of compensation for the land beyond the fencing area on the border villages did not catch the fancy of the PM during his visit to the area and his long speech, leaving the entire beneficiaries, who were battling many local issues, in a quandary.