Washington: Beneath northern India’s irrigated fields of wheat, rice, and barley … beneath its densely populated cities of Jaiphur and New Delhi, the groundwater has been disappearing. Halfway around the world, hydrologists, including Matt Rodell of NASA, have been hunting for it.

Where is northern India’s underground water supply going? According to Rodell and colleagues, it is being pumped and consumed by human activities — principally to irrigate cropland — faster than the aquifers can be replenished by natural processes. They based their conclusions — published in the August 20 issue of Nature — on observations from NASA’s Gravity Recovery and Climate Experiment (GRACE).

“If measures are not taken to ensure sustainable groundwater usage, consequences for the 114 million residents of the region may include a collapse of agricultural output and severe shortages of potable water,” said Rodell, who is based at NASA’s Goddard Space Flight Center in Greenbelt, Md. 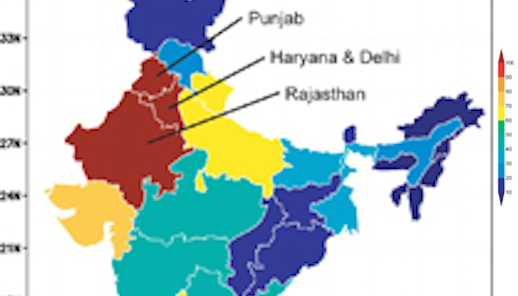 The map, showing groundwater withdrawals as a percentage of groundwater recharge, is based on state-level estimates of annual withdrawals and recharge reported by India’s Ministry of Water Resources. The three states included in this study are labeled. Credit: NASA/Matt Rodell

Groundwater comes from the natural percolation of precipitation and other surface waters down through Earth’s soil and rock, accumulating in aquifers — cavities and layers of porous rock, gravel, sand, or clay. In some of these subterranean reservoirs, the water may be thousands to millions of years old; in others, water levels decline and rise again naturally each year.

Groundwater levels do not respond to changes in weather as rapidly as lakes, streams, and rivers do. So when groundwater is pumped for irrigation or other uses, recharge to the original levels can take months or years.

Changes in underground water masses affect gravity enough to provide a signal, such that changes in gravity can be translated into a measurement of an equivalent change in water.

“Water below the surface can hide from the naked eye, but not from GRACE,” said Rodell. The twin satellites of GRACE can sense tiny changes in Earth’s gravity field and associated mass distribution, including water masses stored above or below Earth’s surface. As the satellites orbit 300 miles above Earth’s surface, their positions change — relative to each other — in response to variations in the pull of gravity. The satellites fly roughly 137 miles apart, and microwave ranging systems measure every microscopic change in the distance between the two.

With previous research in the United States having proven the accuracy of GRACE in detecting groundwater, Rodell and colleagues Isabella Velicogna, of NASA’s Jet Propulsion Laboratory and the University of California-Irvine, and James Famiglietti, of UC-Irvine, were looking for a region where they could apply the new technique.

“Using GRACE satellite observations, we can observe and monitor water changes in critical areas of the world, from one month to the next, without leaving our desks,” said Velicogna. “These satellites provide a window to underground water storage changes.”

The northern Indian states of Rajasthan, Punjab and Haryana have all of the ingredients for groundwater depletion: staggering population growth, rapid economic development and water-hungry farms, which account for about 95 percent of groundwater use in the region.

Data provided by India’s Ministry of Water Resources suggested groundwater use was exceeding natural replenishment, but the regional rate of depletion was unknown. Rodell and colleagues had their case study. The team analyzed six years of monthly GRACE gravity data for northern India to produce a time series of water storage changes beneath the region’s land surface.

They found that groundwater levels have been declining by an average of one meter every three years (one foot per year). More than 109 cubic km (26 cubic miles) of groundwater disappeared between 2002 and 2008 — double the capacity of India’s largest surface water reservoir, the Upper Wainganga, and triple that of Lake Mead, the largest man-made reservoir in the United States.

“We don’t know the absolute volume of water in the Northern Indian aquifers, but GRACE provides strong evidence that current rates of water extraction are not sustainable,” said Rodell. “The region has become dependent on irrigation to maximize agricultural productivity, so we could be looking at more than a water crisis.”

The loss is particularly alarming because it occurred when there were no unusual trends in rainfall. In fact, rainfall was slightly above normal for the period.

The researchers examined data and models of soil moisture, lake and reservoir storage, vegetation and glaciers in the nearby Himalayas, in order to confirm that the apparent groundwater trend was real. Nothing unusual showed up in the natural environment.

The only influence they couldn’t rule out was human.

“At its core, this dilemma is an age-old cycle of human need and activity — particularly the need for irrigation to produce food,” said Bridget Scanlon, a hydrologist at the Jackson School of Geosciences at the University of Texas in Austin. “That cycle is now overwhelming fresh water reserves all over the world. Even one region’s water problem has implications beyond its borders.”

“For the first time, we can observe water use on land with no additional ground-based data collection,” Famiglietti said. “This is critical because in many developing countries, where hydrological data are both sparse and hard to access, space-based methods provide perhaps the only opportunity to assess changes in fresh water availability across large regions.”

Above write-up was originally published at nasa.gov. It is reproduced as above for the information of readers of the Sikh Siyasat News.