The game, which featured Sikh entertainment and education throughout, reached 18,000 Americans on Saturday. This event was one of several initiatives planned by the Sikh Coalition across the state with the goal of reaching millions during November’s Sikh Awareness and Appreciation Month in California.

“The Los Angeles Clippers were thrilled to host and honor the Sikh American community,” said Group Events Specialist, Jeana Duran. “We understand how important the Sikh experience is to enriching California and we’re grateful for the hard work and professionalism shown by the Sikh Coalition to make this happen for the second year in a row.” 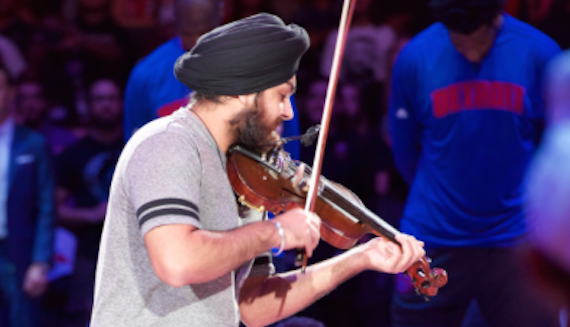 “The Sikh Coalition did a fantastic job co-hosting this event with the L.A. Clippers,” said Los Angeles sangat member, Jagdeep Singh. “It was incredible to see so many Sikh children have the unique opportunity to participate – from playing on the court to standing with players during the national anthem and holding the American flag as the proud Sikh color guard. This is one of many important initiatives happening to educate and raise the profile of the community this month.”

With two weeks left in November there are still numerous Sikh Awareness and Appreciation events planned throughout California. On November 21st, the Sikh Coalition and the Sikh community will be featured at the White House anti-bullying event in Los Angeles. In addition, local awareness initiatives at libraries, schools and museums are happening in multiple cities across northern California in the latter half of the month.