New Delhi: Continuing with its relentless march towards manipulating and changing the history and its facts the National Council for Educational Research and Training (NCERT) under union Human Resource Development (HRD) ministry headed by Prakash Jawedkar of the BJP has decided to drop the reference word  ‘Anti-Muslim’ from ‘Gujarat Riots’ a sub-chapter in political science textbook of class 12th. 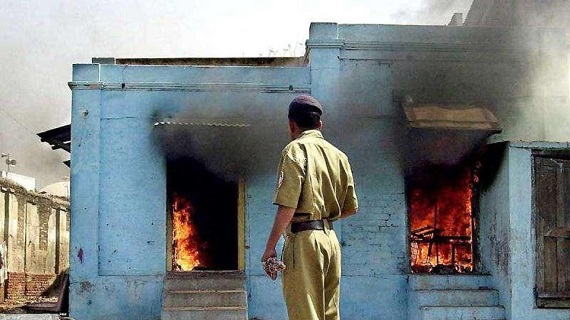 a policeman looks as fire rages in shops in Ahmedabad following an attack by a mob.(AFP File Photo).

While the old history and facts are being re-written in the syllabus meant for schools, colleges and other higher institutions. This project was expedited by the pro-hindutva BJP when it came to power in May 2014. But this latest change in the syllabus can be seen as a part or outcome of the global revisionist movement that has become a new norm under which the historic tyranny or oppression inflicted upon a particular ethnic, cultural, religious or tribal group is denied by those who in actually had committed those crimes.

It was first used by Japan in 2005 for its History Textbook Reform in order to downplay the magnanimity of and its role in Nanking massacre during Second World War in which it is estimaed that over 200,000 Chinese soldiers and civilians were murdered by Japanese military and further raped thousands of its women.

Revisionism is not a new concept in the Indian sub-continent as the 1984 Sikh genocide has been completely obliterated form the history books. The same mindset can now be seen at working in case of steadily removing the mention of Muslim killings in Gujarat in 2002. This change introduced by the NCERT can be said as initial steps towards achieving the aforesaid goal.

Furthermore, the NCERT officials reportedly said that in the approved syllabus, which is used for preparing the textbooks, the word anti-Muslim doesn’t exist. “The syllabus clearly uses the word Gujarat riots. However, the textbook had included the word “Anti-Muslim’. When we started the work on updating the books we were informed about it and we have reverted to “Gujarat riots,” said a senior NCERT official on condition of anonymity.

It is learnt that the decision was taken at a meeting of the course review committee that includes representatives of the Central Board of Secondary Education (CBSE) and the NCERT.

But on its part the NCERT officials has dubbed it as a minor change being made.

The passage on the role of institutions and government remains the same as well. “The National Human Rights Commission criticised the Gujarat government’s role in failing to control violence, provide relief to the victims and prosecute the perpetrators of this violence. The ECI ordered the assembly elections to be postponed,” reads the statement of NCERT officials published in an English vernacular.

Furthermore, the reported passage refers to the 1984 genocide as ‘riots’ that followed the assassination of Prime Minister Indira Gandhi, and says: “As in the case of anti-Sikh riots of 1984, Gujarat riots show that the governmental machinery also becomes susceptible to sectarian passions”, notes Hindustan Times (HT) in its report.