Ontario: On Monday (May 14), Canada’s New Democrats strongly condemned the killings of protesters in Gaza by Israeli Defence Forces and urged the Liberal government to take a more active stance for peace and human rights. According to numerous news reports, at least 55 Palestinians in Gaza were killed and around 2,000 were injured Monday by the Israeli military in demonstrations near the Gaza-Israel border. 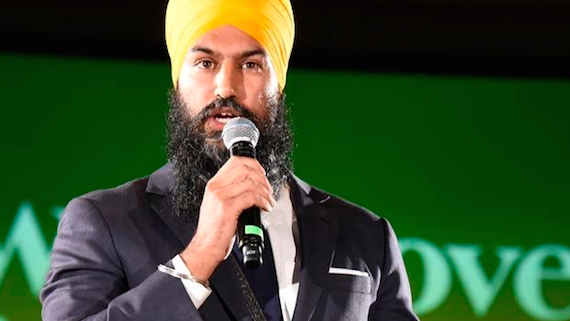 “The use of live ammunition against protestors and resulting deaths are clear violations of international law and human rights,” said NDP Leader Jagmeet Singh. “Our government has been shamefully silent on recent developments in Gaza, and the Prime Minister should condemn the violence, call on Israel to cease violations of international law, and support an independent investigation into these deaths.”

The protests follow the decision by US President, Donald Trump, to relocate the American embassy to Jerusalem and recognize the disputed city as the capital of Israel. Trump’s move has been widely criticized by the international community, as this move will further destabilize the region and hinder the peace process. The Liberal government has refused to condemn Trump’s decision.

“The decision by the US government to recognize Jerusalem as the capital of Israel is reckless and flies in the face of international law, not least since East Jerusalem is occupied Palestinian territory,” said Hélène Laverdière, the NDP Critic for Foreign Affairs. “All those responsible for the outrageous killings in Gaza today must be held to account. The Canadian government must call on the government of Israel to respect international law, condemn illegal settlements, and finally stand up for the rights of Palestinians as well as the rights of Israelis.”

Gaza has been under a total land, sea and air blockade since 2007, a situation that was described by former UN Secretary-General Ban Ki-Moon as a form of collective punishment, which is a clear violation of the Geneva Conventions. Palestinians have been under Israeli military occupation since 1967. Illegal killings, arbitrary and abusive detention, forced displacement, restrictions on movement, the expansion of illegal settlements, collective punishment and institutionalized discrimination have characterized this occupation that has persisted for over half a century. The NDP believes that Canada must do more towards a real, long-term, just peace for Palestinians and Israelis, and must call on the government of Israel to end this occupation.