BC, Canada: The New Democratic Party (NDP) of Canada is set to form government in British Columbia (BC). NDP Leader John Horgan will be BC’s next premier.

The combined forces of the B.C. NDP and Greens defeated the Liberal government and leader Christy Clark in a vote of non-confidence in the B.C. legislature Thursday afternoon. 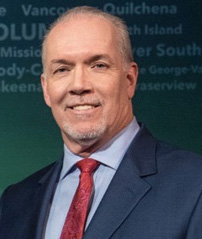 B.C. NDP Leader John Horgan will be the next premier of British Columbia

Outside Government House in Victoria, Horgan said he’s ready to get to work.

“I’m excited,” he said. “Now, seven weeks after the election we can get going on a government that works for the people,” he said.

After a long day of guiding the confidence vote through and waiting for a decision, Horgan said his first priority was to get a bite to eat and get some rest. The next is to begin building a new government and choosing a new cabinet for the first change of political leadership in 16 years.