Chandigarh/ Mohali: Sikh pracharaks are continuously staging a sit-in at Punjab and Chandigarh border near sector 51 as negotiations are going on between Sikh pracharaks and the representatives of the Punjab government. So far (30/10/2015 – 23:01 hrs, IST) three rounds of negotiation have taken place but both sides are yet to reach some agreement. Cabinet Minister Parminder Singh Dhindsa and MP Prem Singh Chandumajra were participating in the negotiations on behalf of the Punjab government along with senior administrative, civil and police officials.

Second demand was that Panjgaraian Sikh brothers, Rupinder Singh Panjgaraian and Jaswinder Singh – who have been framed by the Punjab police in Bargari beadbi case should be released immediately.

Third demand was that the police personnel responsible for firing on Sikh sangat at Behbal Kalan village in which two Sikhs were got killed should be booked for murder and 307 (IPC) and their names should be mentioned in the FIR itself.

The government has been saying that it has formed a SIT to investigate the incidents of beadbi of Guru Granth Sahib and Sikh pracharks may nominate their representatives to co-ordinate with the SIT. 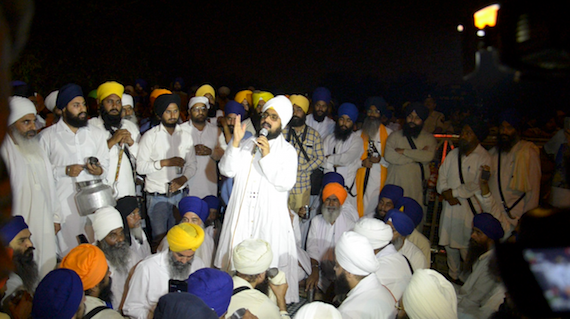 As regards third demand the government officials and representatives say that the police has named suspended Moga SSP Charanjit Sharma in the Behbal Kalan firing FIR. But on being asked to show the copy of FIR they failed to show any document.

At the time of writing this news (23:09 hrs IST) the Sikh pracharaks were waiting for reply of the government regarding their demand related to unconditional release of Rupinder Singh and Jaswinder Singh.

Sikh pracharaks say that they would wait for government’s response before sending out a “bowl of blood” to the Punjab CM as a symbol of their protest and opposition against so-claimed ill-deeds of the Punjab government.

The march first reached at Gurdwara Amb Sahib Mohali where the Sikh sangat parked their vehicles and started a foot march towards Chandigarh based residence of CM Parkash Singh Badal. They march was prevented from entering the UT city by the police that had placed barricades to block the road. Hundreds of police personnel, including women, have been deployed at Punjab and Chandigarh border.