31 years after the 1984 Delhi massacre “KULTAR’S MIME” presents the horror of organized violence through the eyes of innocent children.

Boston (PRESS RELEASE): “KULTAR’S MIME” tells the stories of Sikh children who survived the Delhi massacre through a poem that grew into a play, made its way from Boston to Delhi, and restarted the conversation about a forgotten chapter in history. With a foreword by renowned historian and feminist Dr. Uma Chakravarti, the book brings together the poem “Kultar’s Mime,” the play that developed from it, and an account of the production’s extraordinary journey from Boston to Delhi for the thirtieth anniversary of the massacre.

“KULTAR’S MIME” is the first book on the subject to be released after the Indian Home Minister, Mr. Rajnath Singh’s acknowledgement of the events of 1984 as genocide, in December 2014. 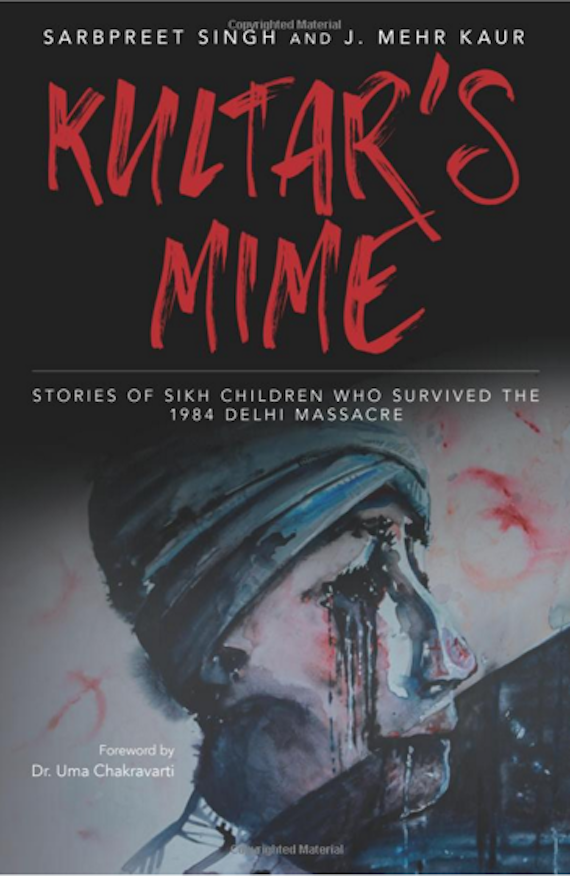 Drawing on unimpeachable sources such as the PUCL/PUDR report titled “WHO ARE THE GUILTY” and eyewitness accounts presented by Madhu Kishwar in Manushi, “KULTAR’S MIME” faithfully documents the terrible violence that descended on Delhi’s Sikhs in 1984, memories of which have been buried under the crushing weight of both trauma and political expediency. According to Human Rights lawyer H.S.Phoolka, who has been fighting for justice for the victims of the massacre for three decades, “One of the most tragic aspects of the injustices and atrocities of 1984 is the lack of awareness of the massacre within the current generation and its total absence from Indian history textbooks. This is where Kultar’s Mime has played a phenomenal role. I express my deepest gratitude to the creators of Kultar’s Mime for bringing the story of the children of the carnage of 1984 to a global platform, for the world to see and to remember.” In the words of veteran journalist, writer and human rights activist Manoj Mitta: “Having tracked Delhi 1984 through the prism of law, I am struck by the sheer authenticity of Kultar’s Mime.”

With its gripping text and emotional story, “KULTAR’S MIME” is a powerful resource that can be used by both Sikh and secular schools to help generations of young Sikhs born after 1984 engage with a difficult chapter of their history. According to Dr. Gurinder Pal Singh, Chairman of the Guru Nanak Khalsa School in San Jose, California, the largest Sikh school in the US, “Narrating stories of such horrible events to children and young people is always a great challenge. Kultar’s Mime provides the answer.” Harinder Singh, co-founder and former CEO of The Sikh Research Institute added that “Genocides have already reached Orwellian proportions, beyond Darfur and Cambodia. If teachers want to add critical components to their curriculums in an accurate, authentic, and responsible manner, Kultar’s Mime addresses the denial of the1984 Sikh genocide very effectively.”

“KULTAR’S MIME” was launched on May 8 at The Kaur and Singh Academy, Bridgewater NJ. Author Sarbpreet Singh read excerpts from the book and shared poignant stories about the play’s journey, followed by a Q/A session. In the words of Gulshan Singh, Principal of the Academy, “At the Kaur & Singh Academy, we educate our young minds about the 1984 Sikh genocide to foster empathy for all victims of sectarian violence and concern for universal human rights. We see Kultar’s Mime as a wonderful tool for doing just that.”

Since September 2014, a theatrical production of “KULTAR’S MIME”, presented by the Sikh Research Institute, has been performed sixty-five times in the US, Canada, Scotland, England and India and has been seen by more than thirteen thousand people. The play will travel to Malaysia in May 2016 for performances in Kuala Lumpur, Melaka, Petaling Jaya, Penang, Ipoh and Johor Bahru.