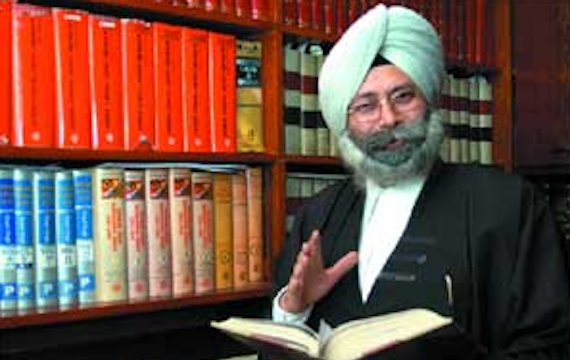 In the to be released biography of Narsimha Rao, it has been disclosed that during the Genocide of Sikhs in Nov 1984, the Police was directed to report directly to the Prime Minister and the Home Minister was deliberately not involved.

From the personal papers of Narsimha Rao it has been revealed that on the evening of 31st October 1984, Narsimha Rao received a call from a Congressmen, very close to Rajiv Gandhi, informing him that the Delhi Police from Commissioner to SHO’s will report directly to PMO, bypassing him, the then Home Minister.

This biography of Narsimha Rao has been written by academician and journalist Vinay Satapatia due to be released in July this year.

This fact which has now come from the personal papers of Narsimha Rao himself. Evidence to this effect had been given before Nanavati Commission by Ex- Law Minister and eminent Lawyer Shanti Bhushan. In his affidavit, Mr. Shanti Bhushan had stated before Nanavati Commission that on1st November 1984 morning he went to Narsimha Rao and requested him to call the army as the Sikhs are being killed on roads openly. Narsimha Rao agreed and called someone on his Rex phone. Rex Phone is a direct phone line between the Prime Minister and his Ministers. Narsimha Rao tried to convince the person on the otherside to call the Army immediately. However, the person on the other side did not agree to call the Army.

The new revelations in Narsimha Rao’s biography that the police was asked to directly report to Prime Minister office on 31st October itself, further substantiates that the Prime Minister Rajiv Gandhi was directly monitoring the situation, that he himself did not want to call the Army and that he has himself masterminded the killings of Sikhs.

Justice Raganathan Commission of Enquiry had held in his Report that on 1st Nov 1984 over 5000 Army men were available and if the army would have been deployed in the morning on 1stNov, it could have saved at least 2000 lives of Sikhs. At page no. 42 of Raganthan Misra Commission Report it was held-’’If the Army had been called in the morning of November1, 1984 – and by then about 5000 army people were at Delhi- the position would certainly not have been as bad as it turned out to be. 5000 Army jawans divided into columns and moving into the streets properly armed would not have brought about the death of at least 2000 people’’.

The new revelations make it clear that the Police didn’t save lives of Sikhs under the order of the PMO. Not only that, throughout Delhi the police was arresting those Sikhs who dared to protect their families. It has come in evidence in the Nanavati Commission and Misra Commission report that whenever the information used to be received that Sikhs are been killed, the information was not even recorded and no action was taken against it. On the other hand whenever information used to be received that any Sikh is firing from inside his house to protect his family from the mob who attacked the house, this information was recorded immediately and a large number of police force was sent. That police force on reaching the spot arrested the Sikhs and threw him in jail and did not touch anybody from the mob and after the arrest of the Sikhs, most of the places/houses were looted, burnt and their families were dishonored. Now, it is clear that all this happened under the orders of the Prime Minister directly.

Now, there is no manner of doubt left that the then Prime Minister, Rajiv Gandhi is directly responsible for genocide of the Sikhs.

With these revelations, the Congress President Sonia Gandhi owes an explanation to the nation. Being the President of the main opposition party of the country, she should disclose what all transpired in her house i.e. in the Prime Minister’s house, on 31st October,1st Nov and 2nd Nov 1984. She is in public life now and cannot escape from her responsibility towards the nation and citizens in the matter of the largest massacre in the history of independent India.