New Jersey: A New Jersey sheriff who was caught on tape making several racist remarks, including those against Gurbir Singh Grewal, the first ever Sikh Attorney General in the United States, and black people, has resigned. Four undersheriffs also submitted their resignations, the Bergen County Sheriff’s Office announced on Sept. 21.

Bergen County Sheriff Michael Saudino stepped down from the post effective immediately, due to the political pressure that the remarks caused, U.S. media reported. 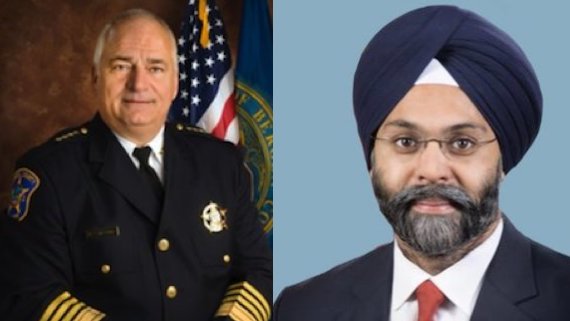 The resignations came after a recording released by WNYC radio on Sept. 20 revealed derogatory remarks made by Saudino, which were recorded on Jan. 16, following the inauguration of New Jersey Governor Phil Murphy, which Saudino attended.

Saudino is also heard saying about the governor’s speech, “He talked about the whole thing, the marijuana, sanctuary state… better criminal justice reform. Christ almighty, in other words let the blacks come in, do whatever the fuck they want, smoke their marijuana, do this do that, and don’t worry about it. You know, we’ll tie the hands of cops.”

After the recording went public, Murphy too made a statement calling for Saudino’s resignation. “Without question, the comments made on that recording are appalling, and anyone using racist, homophobic, and hateful language is unfit for public office, he said. “If indeed that is Sheriff Saudino’s voice on the recording, he must resign.”

Saudino made a public a public apology, saying his comments “are not representative of the person that I am.” He referred to the manner with which he has conducted his life personally and as a law enforcement officer.

Gurbir Singh Grewal called the resignation an “important first step” in repairing the relationship between the Bergen County Sheriff’s Office and the community. “We cannot allow the actions of a few officials to taint the entire law enforcement community. The overwhelming majority of law enforcement officers in Bergen County and across New Jersey are honorable public servants who care deeply about the work they do and the way they do it. Their good work – performed day-in, day-out – is ultimately what will help repair the damage brought about by Sheriff Saudino’s highly inappropriate comments,” he said.