Chandigarh: While chairing a meeting of senior state police officers at Punjab Bhawan Chandigarh on April 1, Punjab Deputy CM Sukhbir Badal said that the Punjab government would recruit about 7,000 constables, 465 of sub inspectors and 850 other employees to provide additional manpower for district policing.

He said the long pending issue of seniority in the ranks of Inspectors/SIs/ASIs/HCs had been resolved which would lead to over 3,200 promotions in the various police ranks that included 225 Inspectors, 400 Sub Inspectors, 660 Assistant Sub Inspectors and 1,700 Head Constables. 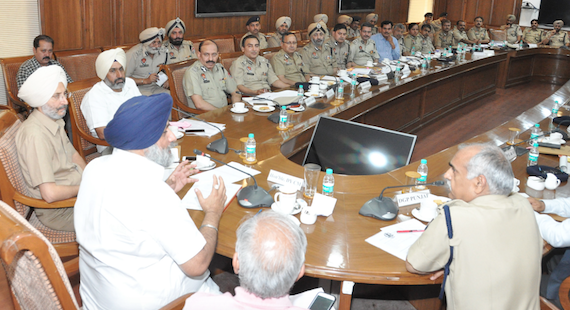 While welcoming the Deputy CM, the DGP Suresh Arora thanked him for providing additional funds to the tune of Rs.107 crores to the police in the current fiscal.

He stated that Rs.25 crore would be used for police welfare, Rs.11 crore for strengthening the intelligence network, Rs.9.83 crores for investigation expenses to police stations besides building up police infrastructure in the state.

Dy. CM Sukhbir Badal also stressed to install CCTV cameras in all cities and towns on mission-mode through community participation, besides separation of investigation and law & order with formation of special teams to investigate serious crimes and traffic enforcement.