Ottawa, Canada (June 16, 2015): The World Sikh Organization of Canada is deeply concerned by recent changes made to the Canadian Air Transport Security Agency’s (CATSA) procedure for screening religious headgear, which came into effect on April 15, 2015. CATSA procedures now require the mandatory secondary security screening of turbans and other religious headgear.

The WSO learned of the change from concerned Sikh travelers. Canadian Sikhs were not consulted with respect to the new procedure and no notice or forewarning was provided prior to its implementation. 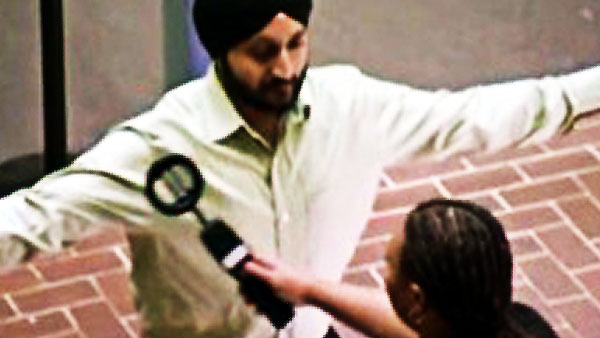 According to CATSA’s recently updated web page on security screening (http://www.catsa.gc.ca/breezethrough), both religious and non-religious headgear will be treated in the same manner. Individuals with headgear will go through the walk through metal detector and regardless of whether there is an alarm or not, will then be required to pat down their own head covering and present their hands for Explosive Trace Detection. If the head covering causes an alarm, a physical search will be required.

According to CATSA’s new procedure, turbaned Sikhs will be subject to compulsory secondary screening, whether they alarm or not.

Prior to this change, turbans and other religious headgear were not subject to mandatory secondary screening.

Individuals wearing non-religious headgear have the option to avoid secondary screening by simply removing their headgear. That option is not available to Sikhs who wear their religiously required turban.

It is unclear as to why religious headgear is being subject to mandatory Explosive Trace Detection. Similar detection is not mandatory for items like shoes, sweaters or for various assistive medical devices. No evidence has been produced to justify the compulsory secondary screening of religious headgear.

Many Canadian Sikh travellers have noticed the effect of these changes and have contacted the WSO.

“Due to my work as a hockey commentator for the past 8 years, I have been travelling extensively on a weekly basis. Recently, however, I have been made to perform a self-patdown for explosive residue each and every time I go through security. I am not sure why, all of a sudden, this became necessary”, said Hockey Night in Canada in Punjabi’s Harnarayan Singh.

“Since April 15th, 2015, I believe I am being racially profiled and targeted as a security threat in Canada because of my faith and my turban.” said Raj Singh Hundal, a Vancouver-based turbaned Canadian Sikh who frequently travels for business between Canada and the US.

“I am being considered a security threat every time I travel for work purposes, even though I am a NEXUS card holder. I was told that CATSA made the changes to align with the TSA in the US, but this policy doesn’t align with the TSA. From my experiences as a NEXUS traveler, CATSA’s policy goes above and beyond what the TSA does in the US, and I believe it is targeting religious minorities such as turbaned Sikhs” Hundal said.

WSO President Dr. Amritpal Singh Shergill sent a letter to Minister of Transport Lisa Raitt on May 12, 2015 outlining the concerns of the organization. Neither the letter nor subsequent requests to meet have received any response.

Dr Shergill said, “We are deeply concerned by these changes and find it unfortunate that both non-religious and religious headgear are being treated equivalently. Sikhs in Canada must now expect to be secondarily screened every time they go through airport security- whether they alarm or not. We feel that this change to CATSA’s screening policy is unnecessary and discriminatory, subjecting Sikh passengers to delay and inconvenience. We fear that the revised procedure could potentially lead to racial profiling and bias where Sikh passengers are singled out due to their turbans and unjustly perceived as being security risks.”

The WSO has called on Transport Canada to immediately suspend this new headgear screening procedure and revert to the one in use prior to April 15, 2015.