New York, USA: He doesn’t know why he did it.

But when a gunman tried to rob Amrik Singh’s Citgo gas station in Hyde Park, Singh fought back — first by throwing shoes, then by chasing the armed suspect out of the store.

“I had (not) planned to do something,” said Singh, a 58-year-old married father-of-two and a longtime Hyde Park resident. “Something can tell me inside … what to do.” But at first, “I tried to give him money. I don’t know really, what happened.”

State police, who were still looking for the suspect Wednesday evening, released surveillance video of the incident.

Singh has owned the Route 9 Mini Mart Citgo Station in Staatsburg for 19 years, he said. He, along with his wife and father-in-law, run the daily operations of the store, which has been robbed once before, Singh said. 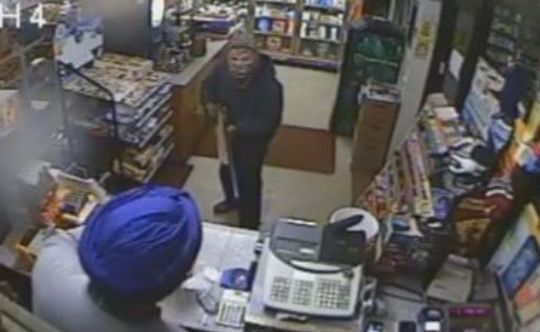 But Tuesday was just another night for Singh, until the suspect — a white male, described as 5-foot-10 with a thin build — came in with a shotgun around 8 p.m. He was wearing dark clothing, two masks and gloves.
The video shows the suspect brandishing a shotgun in Singh’s direction.

“I don’t see him when he walks in,” Singh said of the suspect, “just when he comes in the door. He (has) got a shotgun” and was wearing a camouflage mask. The suspect donned another mask on top of the camouflage one.

Amrik Singh, owner of Staatsburg Citgo in Hyde Park shows the sandal that he threw at a would be robber on Wednesday. The assailant fled the store after Singh confronted the man Tuesday night. (Photo: Patrick Oehler/Poughkeepsie Journal)

Singh said he told the suspect that he didn’t have any $100 bills and tried to demonstrate by lifting the cash register tray, so the gunman could see underneath.

“I pull out the tray full of change and I showed him, nothing’s there,” Singh said. “Then he tried to grab the change, he comes really close to me, close to my belly … and I try to grab him.”

Singh threw his shoes at the gunman — on the video, one shoe Singh threw appears to hit the suspect in the neck or shoulder — before rushing around the counter and pushing the gunman out the door.

Outside of the store, “I go try to grab him,” Singh said. “He shoots the gun at my feet.”

The shotgun round struck the ground, police said. The mark from the shot was clearly visible in the lot surrounding the gas station Wednesday.

“I fell down in the parking lot” and the suspect fled alone in his vehicle, Singh said.

But the gunman also left “empty-handed,” Singh said. “He didn’t get anything.”

His adrenaline pumping, Singh had trouble dialing police on the phone right after the fight. But an off-duty officer who had been driving past the store heard the shot fired and turned around, Singh said. That officer helped Singh contact authorities.

Maryann Monachelli, a longtime customer of Singh’s, said she was “devastated” when she saw the surveillance video on the state police Facebook page.

“He’s a hard-working, good man,” said Monachelli, one of the many people who stopped by the store Wednesday to check on Singh. “He didn’t deserve this to happen to him and I want them to catch” the suspect.
Singh said he has no pistol permit or gun, nor does he have immediate plans to obtain either — those may be possibilities in the future.

Anyone with information about the incident is asked to contact investigator Robert Torre at the Rhinebeck state police barracks at +1-845-876-4049, or via email at [email protected]. ​