On this occasion, State and City officials from New York joined Sikh Community members and recognized Guru Teg Bahadur Sahib as the protector of Human Rights.

She promised to recognize the birth anniversary of Guru Tegh Bahadur Ji & the martyrdom day permanently in the NYC Assembly through a resolution. She also agreed to recognize April 18th, 2021, as the “Human Rights Commitment” day. 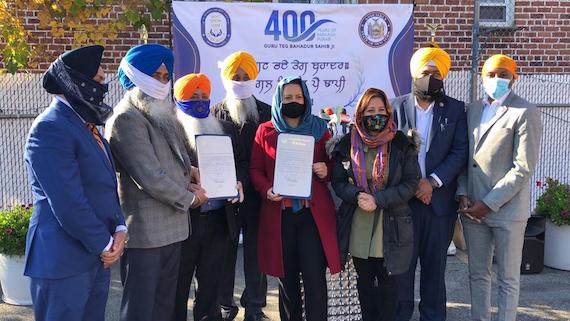 Himmat Singh, Coordinator of World Sikh Parliament, thanked all the officials and ensured the World Sikh Parliament’s welfare council’s continued support to combat covid-19. Himmat Singh worked hard to get this citation passed. It is the first time that a citation is given to the Sikh community in New York. He said, “the sacrifice of Sri Guru Teg Sahib teaches every Sikh to be proactive and defend human rights and justice locally and abroad.”

While giving historical references, Dr. Amarjit Singh, Spokesperson of the World Sikh Parliament, stressed the importance of active political activism and that the United Nations should also recognize this day.

Many Sikh leaders from the east coast joined the event to pay their tributes to Guru Teg Bahadur Sahib Ji’s sacrifice, defending human rights and social justice. This event was possible with the joint effort of the World Sikh Parliament members of the US Region.