Tamil Nadu: Nine people were killed as police opened fire on protesters who were protesting, demanding closure of a copper smelting plant in Tamil Nadu’s port city of Tuticorin. The protesters were leading a procession towards the collectorate defying prohibitory orders. About 20,000 people gathered at the protest site today and stormed the district collector’s office.

Thousands of local residents have been protesting for more than three months against the Sterlite copper smelting plant and its reported expansion but complained that the state government had not responded to their demands. They had intensified protests demanding closure of the plant after reports came in that the group was seeking licence for expansion as the initial 25 year licence comes to an end. 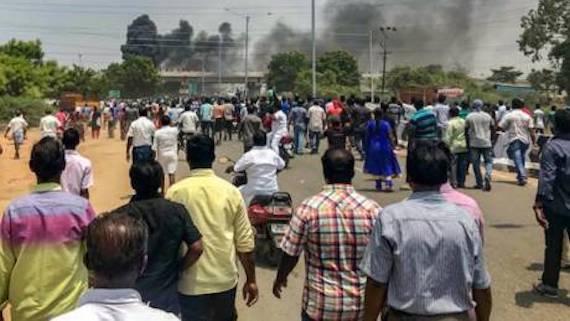 Nine People Protesting Against Copper Smelting Plant were Shot Dead In Tamil Nadu on May 22, 2018

In March 2013, hundreds of people suffered breathing difficulty, nausea and throat infection following a gas leak from the plant. Though the plant was ordered to shut down following allegations of violating pollution control norms, the National Green Tribunal had ultimately allowed it to be reopened.

The same year in another case spearheaded by MDMK chief Vaiko, the Supreme Court had slapped a 100 crore fine on the plant for polluting over the years. However, at that time Sterlite, run by the Vedanta group, had claimed it adheres to pollution control norms. Sterlite began operations in 1996.