No Access to Gurdwara Stage for Indian Officials: 16 BC & Alberta Sikh Gurdwaras Join the Move

BC, Canada: Endorsing recent steps taken by Sikh Sangat and Gurdwara Sewadars in Ontario to restrict access to Gurdwara stages and reserving the right to bar entry to Indian Government Officials as a strong declaration, 16 Gurdwara committees in British Columbia and Alberta provinces of Canada have also announced to join the move.

A notice/statement issued in this regard (copy available Sikh Siyasat News) says that the Sikhs residing in Canada will not give in or bow down to the interference and pressure placed upon them by the Indian state and their representatives.

This initiative was moved forward in western Canada by Gurdwara Sahib Dasmesh Darbar (Surrey, BC) and Gurdwara Dasmesh Culture Centre (Calgary, AB) and a total of 16 Gurdwaras in BC & Alberta agree and support the move.

“Although this policy of restriction already exists informally, it is due time for a formal declaration”, the Gurdwara representatives said. 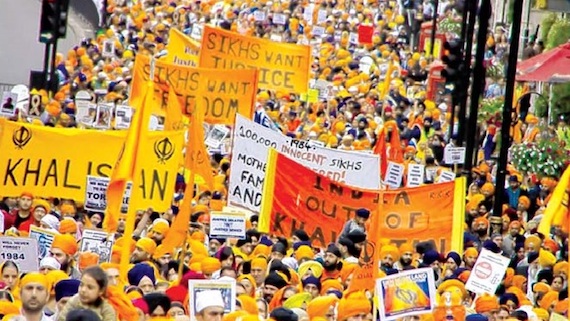 June 2011: Sikhs taking out a memorial march in London to commemorate the anniversary of June 1984 attack on Darbar Sahib by Indian Army | File Photo | Image used for representational purpose only

“It should be noted that this step is being taken not to restrict access to the Guru, but rather to ensure that the Gurdwara Sahib remains azaad from the interference of corrupt officials who represent a government that for the last 4 decades has committed genocide against the Sikh kaum and has never had positive intentions in dealing with Sikhs as a separate nation of people. Further, Sikhs in Canada have been humiliated and threatened by Indian Consulate offices across the country when trying to access their native homeland of Punjab and being required to have a travel visa (issued by Indian Consulate offices) to do so”, the statement reads.

“Gurdwaras in Canada have often been approached by Sikh sangat with stories of mistreatment at the hands of these Indian officials who are keen to abuse their power, further subjugate Sikhs, and have attempted to infiltrate Gurdwara Sahibs and Sikh organizations in Canada since 1984”, the statement reads further.

While referring to arrest and detention of Scottish Sikh citizen Jagtar Singh Johal alias Jaggi by the Indian agencies, the statement said [t]he ongoing subjugation of Sikh voices through these types of brutal means justifies the steps being taken by Gurdwara Sahibs throughout Canada in order to ensure that India understands that it will be held accountable for its continuous violation of human and political rights of Sikhs and other minorities.

The statement, however, added that no individual is banned from visiting Gurdwara and the prohibition is only for Indian officials when they try to visit Gurdwara Sahib in their official capacity.

“To be clear, no individual is being banned from Gurdwara Sahibs, but Indian representatives in official capacity will not be permitted to address the sangat in Guru Darbar and sewadars from each Gurdwara Sahib may individually choose to which degree they will allow Indian officials access. The purpose of this declaration is to make it known that Sikhs in Canada will not be cornered by the Indian government and their representatives will be accountable to the Sikh sangat everywhere they go”, reads the statement.

“The safety and security of all peoples attending the Gurdwara Sahib is of primary importance to all Gurdwara sewadars and cannot be compromised. We take this responsibility seriously and additional measures will be taken if this interference continues”, it reads further.