New Delhi/ Chandigarh: Central Government of India recently (on Wed. – July 22) told Supreme Court that there was no fundamental right to privacy under the Indian Constitution. 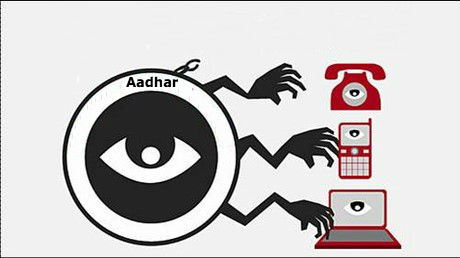 No Fundamental Right to Privacy, says Govt. of India

Attorney General Mukul Rohatgi said, “An eight-judge bench and later a six-judge bench in two separate cases held that privacy was not a fundamental right, but in nearly 25 judgments subsequently by smaller benches, privacy came to be recognised and cemented as part of the fundamental rights under Article 21.”

He said that the Supreme Court of India should constitute a separate constitutional bench to decide that Right to privacy was not a fundamental right.

He was countering the contention that the Aadhaar scheme, based on collecting personal data, violates citizens’ right to privacy.

Many civil rights organisations have challenged Indian government’s controversial Aadhar scheme in the Supreme Court of India maintaining that the scheme aims at invasion in to privacy of citizens.

The matter is reported in detail by the Indian Express (IE). Relevant excerpts from the IE news report are as follows:

[ Defending the validity of the Aadhaar card, Rohatgi said that since a batch of petitions contended that collection and sharing of biometric information was a breach of their “fundamental” right to privacy, it must first be settled authoritatively whether privacy is a fundamental right.

Rohatgi also read out from another SC judgment by a six-judge bench in 1963, holding that “the right of privacy is not a guaranteed right under our Constitution”.

He then cited judgments on the subject since the 1990s which noted that the right to privacy can be construed as a fundamental right subject to certain restrictions and circumstances. “These judgments then diluted what was held earlier. The yardstick for inferring it as a fundamental right changed from compelling public interest to harm to private interests, including life, health, safety. Interestingly, all these judgments were by smaller benches,” Rohatgi said.

He said that once an eight-judge bench had held this not to be a fundamental right, the smaller benches of two or three judges could not have held otherwise without referring it to a larger bench. “It was completely wrong for smaller benches to say the right to privacy can be read into Articles 21 or 19. Further, it was also not open for the courts to carve out certain rights not envisaged by the Constitution,” said Rohatgi, adding that the divergent views warranted a reference to a larger bench.

Appearing for the petitioners that have challenged the validity of the Aadhaar card, senior advocate Shyam Divan criticised the Centre’s arguments and said the Constitution has to be read as a dynamic document, requiring interpretations to suit modern times. He also pointed out that the government has admitted in its affidavit that the right to privacy is a fundamental right, hence it was too late to question this now.

But the bench asked Divan if it will not be proper to have this issue decided authoritatively once and for all when a “serious hiatus in the law” has been pointed out by the government. The bench will continue hearing the arguments by Divan, who is opposing the reference. ]