London: This week we have seen the Sikh Federation (UK) with the support of over 150 Gurdwaras and Sikh organisations challenge the Cabinet Office and Office for National Statistics (ONS) in the High Court.

The objective has been to get the process used by ONS to decide on ethnic groups to be included in the Census 2021 declared unlawful. It has also allowed the case for the inclusion of a Sikh ethnic tick box in the Census 2021 to be highlighted in court and reference to be made again in court to Mandla v Dowell Lee [1983] where the House of Lords held that Sikhs are an ethnic group that cannot and has not been disputed in court.

The hearing lasted a day and a half, during which the court heard arguments from David Wolfe QC representing the Sikh community and from the legal team representing the Cabinet Office. The Sikh community had its opportunity to present arguments to the court. The hope is the court will agree that the Defendant (Cabinet Office) has acted unlawfully. The judgment has been reserved until a later date, probably in 3-4 weeks. 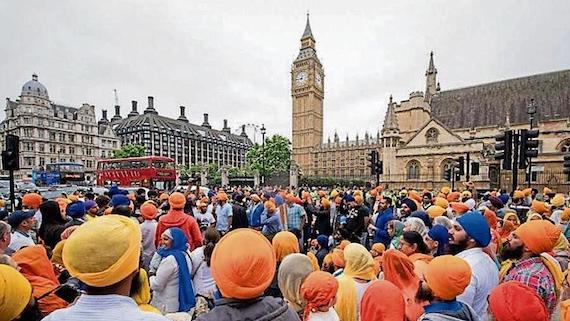 ONS has been backtracking in recent months since the legal action was launched and increasingly arguing the optional religious question is a reliable basis of accurately estimating the number of Sikhs in the Census 2021. This is a dishonest approach as ONS had by the end of 2017 reduced the number of ethnic tick boxes requested from 55 to 4 (one of which was Sikh) as they concluded that the 4 had the highest user need and due to the non-availability of alternative data sources.

In 2011 over 20 million of the UK population did not answer the optional religious question or chose the first option of “no religion”. In some local authorities less than 50% of the population declared their religion. ONS have admitted they have no reliable way of determining how many of the 20 million would answer the ethnic group question if a Sikh ethnic tick box option was available.

A few weeks ago, Jonathan Athow, the Interim National Statistician and Chief Executive of the UK Statistics Authority revealed for the first time in the Census 2011 that thousands that recorded their religion as: Christian, Muslim and Hindu unbelievably ticked “other” and wrote “Sikh” as their “ethnic” group. If the option of a Sikh ethnic tick box had been available numbers would clearly have been much higher. ONS and those relying on the optional religious question knowing this fact and over 20 million did not declare their religion now have no answers.

ONS anticipate in 2021 the optional religious question will become almost totally useless due to the level of non-response or respondents choosing “no religion”. If the trend from 2001 and 2011 continues there will be over 25 million of the UK population that will not declare their religion. Faced with these facts ONS know they have no reliable way to accurately estimate the number of Sikhs, although the option of a Sikh ethnic tick box to the compulsory ethnicity question would clearly assist.