Chandigarh: Notwithstanding in-fight between different camps of the Aam Aadmi Party in Punjab, the AAP is able to trigger massive crowd mobilisation in Punjab. For the past few weeks Aam Aadmi Party’s rallies are growing bigger.

AAP has secured massive support in Punjab in terms of crowd in party rallies, it is to be seen how far this support gets translated into vote during upcoming assembly polls in 2017.

AAP officials maintain that their membership has already crossed 22 lakh. The party is reportedly planning to soon roll out a campaign to mobilize funds. 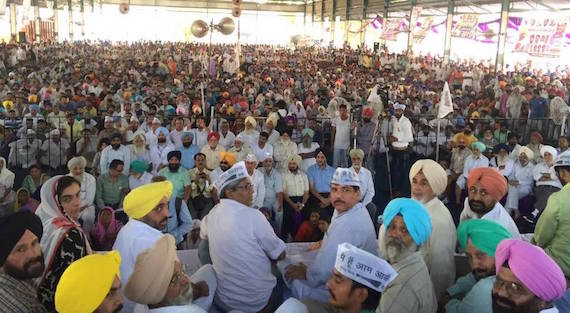 A view of AAP rally in Mullanpur Dakha

“Though we have to collate all the data of manual and online membership modes, our inputs indicate that the number is safely above 22 lakh. The drive started on August 20 and would continue till October 9,” AAP’s organization building in-charge Durgesh Pathak reportedly told Times of India.

“Ours was a three-fold programme to attach people with us. While the first two phases included membership drive and public rallies, the third is that we will roll out a special campaign to mobilize funds, including from the NRIs,” he reportedly added.

AAP’s rising graph has already been acknowledged Congress party’s CM post aspirant Capt. Amarinder Singh. However, ruling party Shiromani Akali Dal (Badal) is dismissing AAP as a major poll competitor in Punjab. SAD (B) president Sukhbir Badal has been repeatedly saying that AAP has no base in Punjab.

Notably AAP was able to record a success on 4 Lok Sabha seats in Punjab. Those four were only victories for the emerging party during last Lok Sabha elections. AAP has recorded a massive comeback in Delhi as the party was able to secure 67 out of 70 seats in Delhi. Soon after the Delhi victory internal troubles of the party were exposed and Arvind Kejriwal led camp had shown out doors to Yogendra Yadav, Prashant Bhushan and some other founding members. Aftershocks were observed in Punjab also where the party recently decided to suspend two of it’s MPs due to alleged anti-party activities.