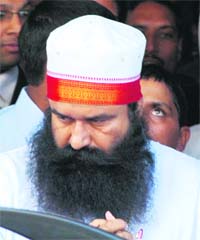 Chandigarh: A day after Sikh Jatehdars granted so-called pardon to controversial dera head Gurmeet Ram Rahim, a movie featuring him MSG 2 – The Messenger was released across Punjab today. His previous movie MSG was banned last years. Though MSG 2 was not formally banned in Punjab, cinema halls had restrained to screen the film reportedly under secret directions from Punjab government.

Notably dera head was granted so-called pardon by Sikh jathedars for his 2007 blasphemous acts in which he had attempted to personify himself as Sikh Gurus. Personification of Sikh Gurus is strictly prohibited. Sikh jatehdars have reprotedly acted under pressure from Punjab’s ruling party Shiromani Akali Dal (Badal) that has used Sikh institutions to fit it’s political calculations. There has been strong resentment from the Sikh panth against yesterday’s decision by Sikh Jathedars.