Chandigarh: Facebook pages of diaspora Sikh organisations and media networks are being blocked in the Indian sub-continent. After Sikhs For Justice, Neverforget84.Com and June 84 Movement, Facebook page of Sikh24.Com stands blocked in India.

The Facebook page of Sikh24, an online news portal, was reportedly blocked by Indian government in the first week of June. 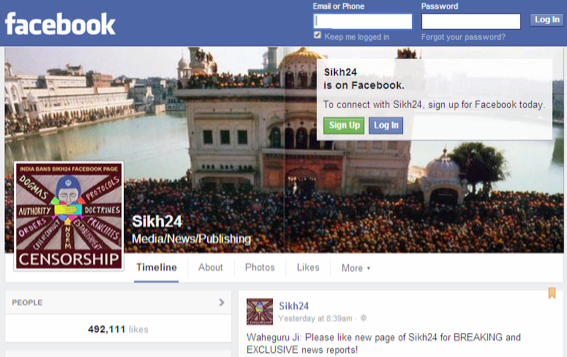 The editors of wrote: “Indian authorities have blocked Sikh24 social media pages, including Sikh24’s Facebook page on Thursday. Users report that some internet service providers do allow the sites, while most in the north-western states, such as Punjab, Jammu and Kashmir have blocked Sikh24 completely. While still spottily enforced, the blocking has seemed to become stricter following the shooting death of a Sikh who was protesting peacefully”.

Notably Facebook page of Sikh24, that has more than 492K fans, is accessible outside India.