Melbourne, Australia: Australia’s Sikh community has expressed outrage over a cartoon depicting a Sikh man smoking a cigar, which was published in the Herald Sun on Thursday. The issue was given a hype by SBS Punjabi as it posted a Facebook post in this regard.

Tobacco and drugs are strictly forbidden in Sikh religion and a news by SBS notes with reference to SBS Punjabi’s Executive Producer Manpreet K Singh said that Knight was “well aware” of the fact that Sikhs don’t smoke. 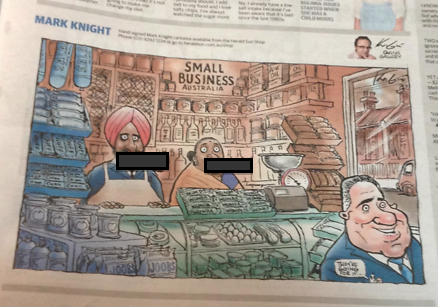 Cartoonist Mark Knight said the cartoon was in relation to Treasurer Joe Hockey’s policy to make small business the engine room of Australia’s economy. He  said his intention was not to make fun of Sikhs, but rather reflect Australia’s diversity.

“I’m trying to include in my drawing all elements of our community, women in hijabs, our Asian Australians, Indians,” he said.