Sanjose, CA, USA: “This is not only a violation of human rights but is also a murder of tall claims of our government for the largest democracy in the world”, an NRI body said in a press release while referring to police crackdown against Sikh activist Surat Singh Khasla’s peaceful struggle to secure release of Sikh political prisoners.

Dalwinder Singh Dhoot Chairman North American Punjabi Association (NAPA) said that the US citizen daughters are not being allowed to meet their father Bapu Surat Singh Khalsa, who is on indefinite hunger strike in Ludhiana demanding the release of Sikh prisoners who already served their jail times, is also forcefully detained by the police. He is not allowed his daughters. He son is also arrested by the Police. 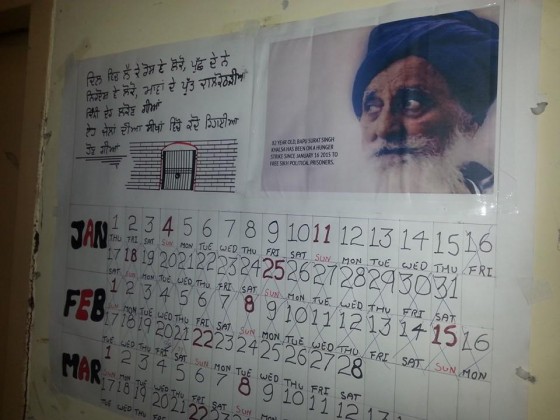 NAPA leader alleged that US citizen daughters of Bapu Surat Singh Khalsa had come to meet her father now under detention and being kept in the hospital but they are not being allowed to meet him. The police was trying to forcefully feed him.

Ravinderjeet Singh Gogy also a US Citizen and son of Bapu Surat Singh Khalsa too had been arrested under sections 107/151 so that he was not able to return to USA, he added.

He said that US Ambassador in New Delhi had been informed to seek his help for the immediate release of US citizen Ravinderjeet Singh Goggy Dhoot described the treatment being meted out to Bapu Surat Singh Khalsa and his NRI Family members by the police as inhuman as the family members were being harassed by the police to put pressure on Bapu Surat Singh to break his fast.History will not pardon those who are responsible for these kinds of atrocities, added he.