Amritsar: LED screens installed at Heritage Street that leads to Darbar Sahib complex were depicting commercial advertisements  with objectionable content  that hasn’t gone down well with the visiting Sikh Sangat.

As reported by the media Sangat visiting the shrine and those residing or running shops in the area find the ads, which are a source of revenue for both the Amritsar municipal corporation (MC) and Punjab Urban Development Authority (PUDA), objectionable.

They have especially taken objection to an ad of a smartphone company that showed “scantily dressed” models. The authorities came into action after people vented their ire on the social media and stopped the screening of the specific ad. Other ads are still being screened, reads a quote in an English vernacular.

“Have these screens been installed only for showing ads?” a local was quoted as saying. 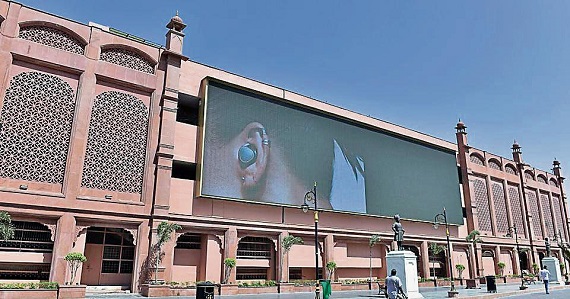 An LED screen installed along the heritage street leading to Darbar Sahib in Amritsar. Sangat took objection to an advertisement with ‘scantily dressed’ models screened on it.(HT Photo)

It is reported that the screens were installed on the pattern of Times Square in New York, USA. At 100-by-30 feet, the screen at the centre is reportedly the largest in India. On the sides of the building, two pairs of smaller screens (30-by-30 feet) have been installed.

Initially, the authorities had claimed the screens will be used to play gurbani hymns and videos on Sikh history and heritage of Punjab. When media persons visited the area on Tuesday, it saw commercial advertisements being displayed on the biggest screen that is opposite Gurdwara Saragarhi. Gurbani being performed at the sanctum sanctorum was being screened on smaller ones, reads a quote from Hindustan Times (HT).

In a statement to media PUDA’s executive engineer said that “Only an hour and a half has been dedicated to the screening of gurbani and other non-commercial content to be decided by the district administration. The remaining time is meant for advertisements. The MC is to collect revenue on the ads, which would be in lakhs.”

The project is being executed under the public private partnership (PPP) mode. Its contract has been given to Jaipur-based NS Publicity firm. PUDA, which is the custodian of the project, is charging ₹5 lakh annually from the firm, which has installed the screens and other related equipment, said media sources.

Media while further quoting its sources in PUDA stated that the firm has started screening commercial ads despite the project being under trial. “The civic body is yet to give a no-objection certificate to it,” they said.

“The matter has come to our notice. The firm screened the objectionable ad mistakenly during a trial run. We will ensure such a thing doesn’t happen in future,” said Surjit Singh a PUDA official.

In a statement issued to the media by MC joint commissioner Sorabh Arora he stated that “He will look into the matter.” Calls to the Jaipur firm proved futile. An employee, who attended the call, refused to speak on the matter, arguing he was not in a position to give a statement.