Amritsar: Representatives of various Sikh groups namely Dal Khalsa, SAD (Amritsar) and others urged the Indian state and the world community to acknowledge the right to self determination of all struggling peoples in accordance with international treaties and covenants, which all democratic nations are expected to adhere to and oblige. 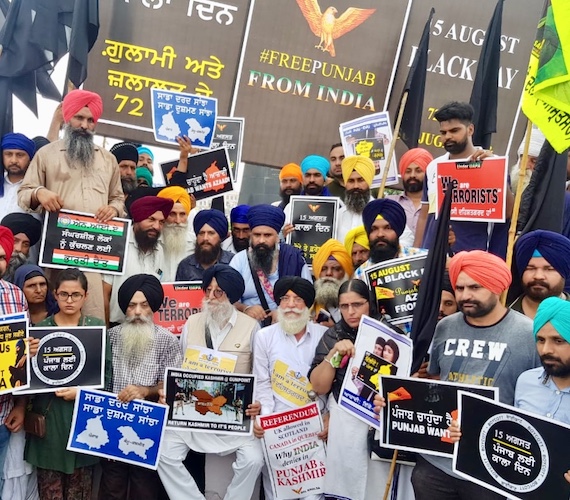 A view of protest by Sikh organizations

In a significant move, Sikh bodies supported by Students for Society (SFS), staged a protest against injustices, discrimination, denial of rights and abrogation of article 370 and caging the people of Kashmir at gunpoint. They rue that using army against civilians has become permanent feature of Indian polity.

They observed Aug 15 as Black day by holding mass protest in 15 districts of Punjab. Dal Khalsa president Harpal Singh Cheema led around 400 activists in Jalandhar to stage a spirited protest against injustices and Indian subjugation. 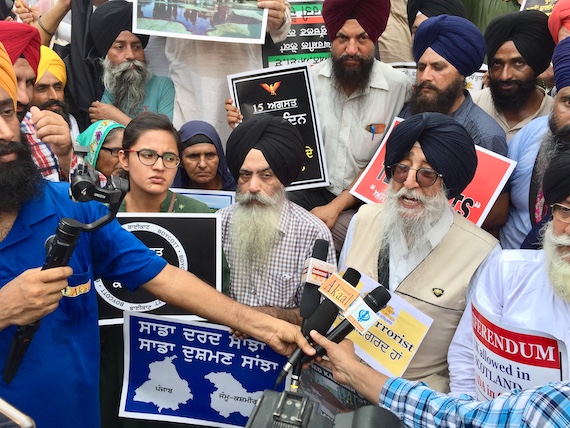 Carrying placards the demonstrators alleged that the last few decades have been tumultuous years of denial, torment, torture, mayhem, vandalism and death. One of the signboard they were carrying conveyed the message of unity between Punjab and Kashmir. It reads “Our pain is same, our enemy is same”.

Leaders expressed solidarity with Kashmiri Diaspora and said revoking 370 won’t kill aspirations of freedom in Kashmiri people. Taking a jibe at Govt amending UAPA to brand an individual as terrorist, the protesters were carrying placards on which it was written: Under UAPA, we are terrorists”. 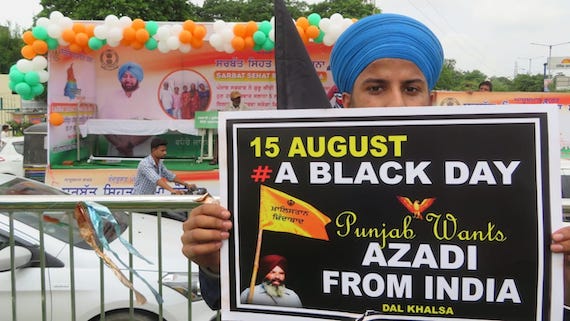 A protester holding a placard

The leaders extended their support for the protest event to be held at UN office in Geneva on 15th Against torture, violence, human shield and rape as an instrument against minorities being organized jointly by minorities of Indian sub-continent. 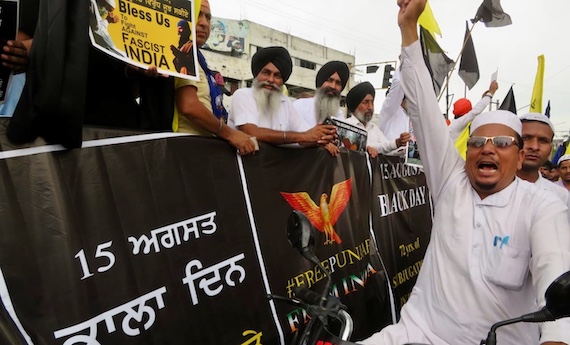 The leaders slammed Tarn Taran police for crackdown on Sikh activists and detaining them to prevent them for exercising their democratic right to protest.

Simranjit Singh Mann, president of SAD (Amritsar) said “since 1947, whenever we had asked for our rights, we had to face bullets, detention and hardships. He urged the Sikhs not to forget the various actions taken by Indian state against the Sikhs before taking part in celebrations.

He said the genesis of the Sikh problem was rooted in the betrayal of commitments and promises Indian leaders made during the partition. Appointing individuals at the higher ranking constitutional post was a ploy to deceive the world that the country was “secular” in real sense, he pointed out.

Dal Khalsa leader Kanwar Pal Singh said while Pakistan and India were celebrating their 72nd Independence Day with great fervor, we, the Sikhs regret that “we had missed the bus”. However, he reiterated that the Sikh desire for freedom is alive and kicking.

Justifying their protest on India’s ‘Independence day’, he clarified that in principle they were not against rejoicing Independence Day of any country. However, it is irony of fate that a country like India has misused every democratic institution to deny the glow of freedom to Sikhs and other minorities.

SFS leader and president of Punjab University, Ms Kanupriya said, on the entire political spectrum, from left to right, we are suffering from an overdose of over-patriotism. “Presently, in India, dissension is sedition. Crackdown and arrest of so many protesters in Tarn Taran gives us clear indications of the repressive system we are living in. The day also marks the state violence against the people of various linguistic and religious minorities. We oppose the very nature of the Indian state that has always been Hindutva fascist”