I would like to thank representatives of our Sikh communities who kindly attended a meeting at New Scotland Yard that I invited them to on Wednesday the 28th October.

I requested a meeting with the Sikh Community as I had become aware of growing concerns over the policing of the protest at the Indian High Commission on Thursday 22nd October 2015.

I believe we have a great and long standing relationship with our Sikh Community with mutual trust, confidence and respect being built over many years. This enabled us to meet and discuss a number of concerns in an open, honest and constructive way. I am grateful to the Sikh community for meeting with me and enabling a better understanding on both of our parts

There are a number of key issues that have been identified which will be taken forward but I feel immediately I must address 2 key points:

An incident occurred where a Met police officer is seen to take a ‘Nishan Sahib’, a sacred flag, from a protestor, snap the stick and throw it to the floor. This is deeply disrespectful to the Sikh community and is not acceptable. I understand the distress and hurt that has been caused and I sincerely apologise to our Sikh community for this.

We will learn from this and a specific briefing point for all officers deployed on future protests of this type will include the significance of the ‘Nishan Sahib’.

I am also aware that Kirpans were removed from two people once they had been arrested. This was against the direction of the senior officer present, who immediately apologised during the protest.

I would also like to offer my sincere apologies for this and once again this be a briefing point for all future protests.

I would like to reassure the Sikh community that no disrespect or offence was intended and apologise for any distress, hurt or offence that has been caused. 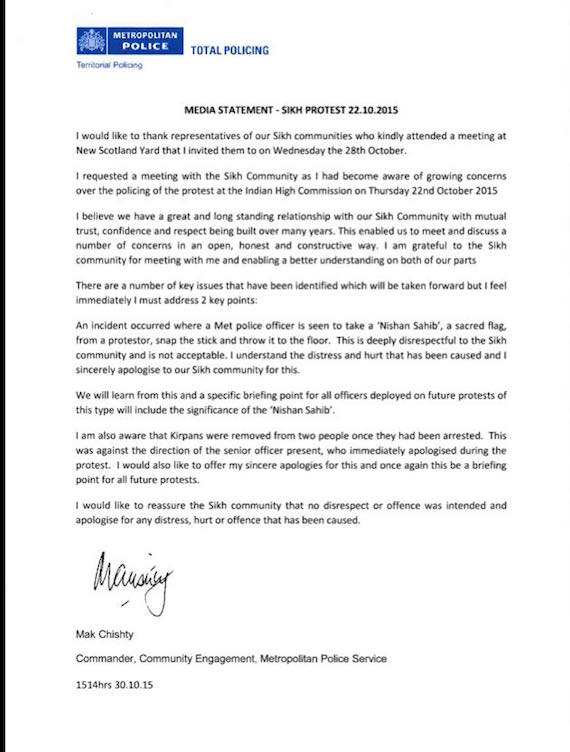 Behbal Kalan firing: Faridkot police did not upload FIR against police on website