Recently there were reports in media that the Punjab police chief DGP Suresh Arora approached the Central government urging it to adopt ‘sympathetic’ view towards Punjab police personnel who are facing trails for grave human rights abuses committed by them during the days of Sikh struggle in Punjab (1980s-90s). 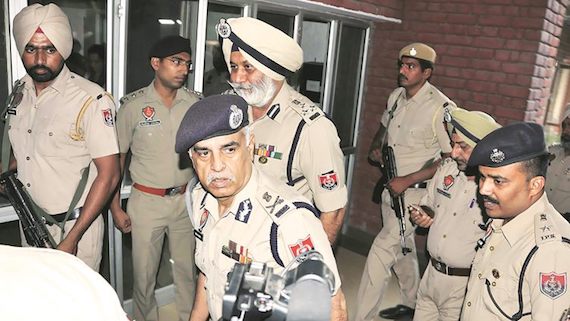 “The department has made a plea on humanitarian grounds and to keep the morale of the police high in view of fresh challenges ahead. Also, the department did initiate action for ‘aberrations’ during the trying times of terrorism”, The Tribune quotes DGP Suresh Arora.

Punjab police chief’s move raises many serious questions. Firstly, is it proper for a top cop to make such statement on a matter which is subjudice? Secondly, should human rights abusers be granted ‘impunity’ on ‘humanitarian grounds’? Thirdly, can crimes amounting to ‘crimes against humanity’ be ignored on the plea of ‘state necessity’?

Before moving to examine aforesaid questions/issues, let us first understand the context which falls in the backdrop of DGP’s ‘appeal’ to India’s MHA.

Human rights activist Jaswant Singh Khalra brought forward the fact that the ‘unclaimed/unidentified dead bodies’ cremated by the state agencies was actually Sikh people who were killed by the Indian forces, especially the Punjab police.

Jaswant Singh Khalra secured cremation ground records from three cremation grounds- Durgana Mandir, Patti and Tarn Taran and on the basis of these records he identified more than six thousand cases where Indian forces had extra-judicially killed Sikhs and they were cremated as ‘unidentified and unclaimed dead bodies’.

As he exposed the widespread and systematic human rights abuse, he was picked up by the police and killed during enforced disappearance in 1995.

CBI Investigation Against Punjab Police officials in Some Cases:

After holding investigation, the CBI registered FIRs against cops who were involved in grave human rights abuses in these cases.

But before the CBI court could proceed with trial in these cases, some police officials got the proceedings stayed from Supreme Court of India in 2002.

The proceedings remained stayed for 14 years. The cops who were named in these cases remained on duty in police and enjoy their salaries and promotions.

On the other hand, the victim families continued to suffer and many witnesses passed away without deposing before the courts and thus the prolonged and senseless stay on proceedings resulted in extinction of important evidence over time.

The Supreme Court of India (SCI) finally lifted the stay on trials in these cases in 2016. It was a travesty of justice that the apex court of India took 14 costing years to decide a simple point that no sanction was required to prosecute a cop who had committed heinous crimes abusing his powers.

Present Status in These Cases:

Presently these cases are under trail in the court of CBI’s special judge. The court is recording witnesses in these cases.

Punjab DGP is part of India’s executive structure and so is the Ministry of Home Affairs. The concerned matter is before the judiciary. In this situation DGP Suresh Arora’s appeal to MHA to take ‘sympathetic view’ in cases that are sub-judice amounts to prompting higher executive to influence the judicial course. Such attempt is serious issue especially in wake of prolonged delay in these matters and failure of judicial organ to impart due and speedy justice.

If one thinks about Punjab DGP’s statement and tries to find what he was actually pleading for, it comes out that he is asking the state to grant ‘impunity’ to human rights abusers on ‘humanitarian grounds’. Punjab DGP’s requested cannot be justified with any standards of humanity which are known to the world.

Pleas of ‘State Necessity’ and ‘Crimes Against Humanity’:

Various authorities in international criminal law embodied in form of conventions on international crimes and judgements of international judicial forums clearly state that crimes against humanity cannot be justified with the plea of so-called state necessity. Therefore Punjab DGP’s argument does not hold any merit in this regard rather by invoking the plea of state necessity the DGP has indirectly confirmed that the human rights abuses that took place in Punjab were not scattered cases of abuse of authority by individuals instead it was part of a considered policy.

Do these cops deserve ‘Sympathetic View’?

Punjab DGP has asked the Central government of India to adopt sympathetic view on humanitarian grounds about cases of men in uniform who subjected people to enforced disappearances, tortured them in illegal custody, killed them in fake encounters and cremated their dead bodies as ‘unidentified’ and ‘unclaimed’. Do they really deserves such a view on ‘humanitarian grounds’? Details of cases in which these cops are facing trail leave no scope for adopting any sympathetic view towards them as the crimes they committed were grave violations amounting to crimes against humanity.

Brief details of these cases will be published by Sikh Siyasat News (SSN) in coming days.