New Delhi (Press Release): Manjit Singh GK president of the Delhi Sikh Gurdwara Management Committee (DSGMC) today informed that on a matter taken up by the DSGMC, the National Human Rights Commission (NHRC) has directed Ministry of Law and Justice Government of India to formulate a uniform policy in all the states across the nation for premature release of prisoners convicted in different cases from time to time.

After suffering for two decades during the days of turmoil for two decades in 1980s, Sikhs now are struggling for release of their detainees who were arrested and convicted during those days. Now Sikhs have to take drastic steps such as fast unto death for raising a very legitimate concern of the community, said Manjit Singh GK referring to protests of fast unto death by Gurbaksh Singh Khalsa on two occasions and Bapu Surat Singh Khalsa who is still on fast in his home in Ludhiana demanding release of Sikh detainees. 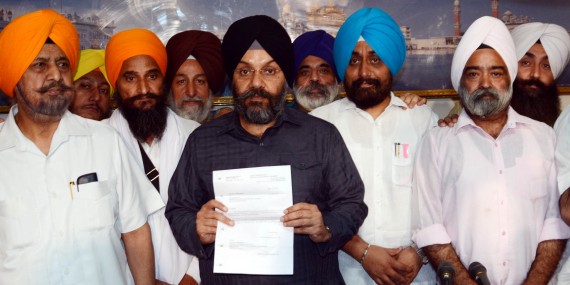 Manjit Singh GK and others

On the other side congress leaders who perpetrated Sikh genocide of 1984 are roaming free. This is dilemma of our country that there are two sets of law for different people and the fight of DSGMC in this direction has shown result, adds GK.

While talking to mediapersons GK said that the directions by the NHRC would go a long way in solving the issue of release from jails, of all those who have completed their convictions period and those who have over stayed in the gallows which is utterly against the human rights laws. He said there are number of Sikhs who have overstayed their conviction terms but are still languishing in the jail for no reason.
Manjit Singh GK raised the issue that in many cases the Sikh detainees have not got single day parole and are languishing in jails for more than 30 years and many of them got so old that they are not in conscious state of mind.

According to the DSGMC President NHRC has given time of eight weeks to the Law Ministry to take action on the demand raised by DSGMC through a petition on 11 th May 2015. DSGMC has raised similar demand before the Supreme Court which last month asked NHRC to take appropriate steps.

In the petition to NHRC and the Supreme Court DSGMC demanded that there should be uniform policy and laws across the country for premature release of prisoners which should be based on the behavior and performance of a particular convict based on periodic assessment adopting a fixed procedure so that there is no scope to favour one convict and discrimination to others despite having competed the jail sentence, Manjit Singh GK told the media persons.

Legal advisor of DSGMC Jaswinder Sigh Jolly who filed the petition before NHRC said that the efforts DSGMC has laid foundation for formulating law towards which the Independent India never thought, even 68 years after it gained independence. When world is taking about the protection of human rights as the most important role of the governments, we are struggling for release of our prisoners even have completion of their sentences, Jolly Adds.

Manjit Singh GK also informed the media that Prof. Devinder Pal Singh Bhullar has been shifted to Amritsar jail after the efforts of Punjab CM Parkash Singh Badal. GK adds that Shiromani Akali Dal would continue its fight for justice.