Hyderabad: Rohit Vemula, one of the five rusticated students of Hyderabad Central University committed suicide. He was found dead hanging in his room this afternoon. Five students were rusticated from the university and forced to vacate their hostel rooms . They were sitting on dharna in the campus for the last 10 days. 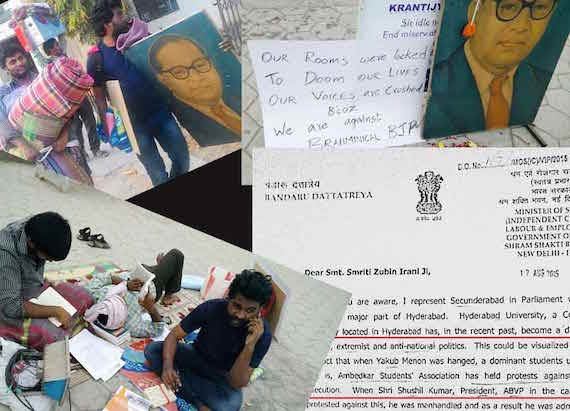 Here is a background of the expulsion the students from an article published by Countercrrents.org on 6th January:

Ambedkar Stundents Association , a leading student wing, when decided to screen “ Muzaffarnagar Baqi Hai “ , ABVP tried to stall the screening and, in the process, a student of ABVP passed certain derogatory remarks on ASA studentsin Facebook and hence was demanded an apology for the same. Finally, he had to submit a written apology looking to the mass student resentment. This, however, was taken up by the local BJP and RSS people, hand-in-hand with ABVP, pressurised VC to expel the ASA leaders on false allegations, though, a committee appointed by the VC gave a favourable report finding no fault of ASA on any of the allegations. Still, VC issued a notice of expulsion, under pressure, which was suspended on account of stubborn protestfrom the students. Subsequently, as part of BJP’s Hindutva game, Mr. Apparao, a Kammaman, who was appointed by BJP as VC after retirement of VC Mr. Sharma, a Brahmin, received a letter from Ministry of Human Resources Development, which is recommended by none other than Mr. Bandaru Dattatreya , Secunderabad MP and Minister of Labour and Employment,calling ASA ‘ casteist, extremist and anti-national’ and suggesting MS. Smriti Irani, Minister of Human Resources and Development, to “change this for better”as these students are “freely” supporting certain unpalatable views like opposing death sentence to Yakub Memon.